Saying goodbye to people and places in Egypt 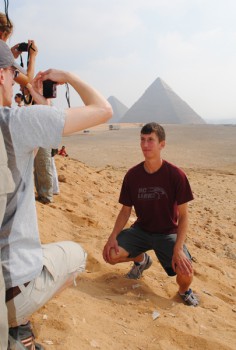 As my time in Egypt comes to an end, I’ll be leaving behind familiar places and people. People who I have lived with, worked with and played with, both in Cairo and in Qosayih, the rural Upper Egyptian town where John Harder and I were placed for service. It has been a good three months, with many memorable experiences, some of which I will share here.

• Hanging out with my host family in Helwan, Cairo. Even though we didn’t have true host families in Egypt, the chef at the church we stayed at in Cairo was like a father to us, and the assistant cooks, Amir and Botros, felt like brothers to me. Who knows how many hours we spent playing ping-pong and joking around together.
• Relaxing at Karnak, the local ‘ahwa in Helwan. In Egypt ‘ahwas are a place where guys can drink tea, Turkish coffee, play backgammon or chess, enjoy water pipe, watch soccer matches (or Egypt’s other favorite sport-WWE) or simply chat for hours on end.
• Eating Egyptian street food, which includes fuul (a type of bean mashed and served with pita), ta’amaya (falafel), and kushary (macaroni, lentils, garbanzo beans, a tomato sauce, and fried onions). Also missed will be the Egyptian prices for which these foods can be bought, running under 5LE (1$) for a meal.
• Spending a day off with the “Secondary 1 guys” from Saint Mena, the school John and I served at in Qosayih. We began by taking a tuk-tuk to a student’s house at the nearby village of Beni Direes (a tuk-tuk is a 3-wheeled baby taxi replete with blue lights, up to 12 rearview mirrors, subwoofers blaring Arab pop music or Qur’an recitations and pictures of WWE stars such as John Sena on the back). Other events included visiting their church, playing FIFA 2010 on Play Station 2, eating a fantastic Egyptian lunch and riding out to the countryside on a tractor to take a photo shoot in galabaiyas, the traditional Egyptian male dress.
• Visiting the homes of friends in Qosayih. It’s a joy to be treated to Egyptian hospitality and receive as much food and drink as one could possibly want – until you’re full that is. I also enjoyed the time I was at a friend’s house and was asked if I wanted to ride a donkey, after which I was led to the next room over and shown a donkey.

While I certainly appreciated all that we saw in Egypt, including the Pyramids, the Valley of the Kings, Mt.Sinai, Old Cairo and much more, what I will miss most is the people. I like the importance relationships have in Egypt and the willingness people have to talk to you. The friendliness and hospitality I have encountered in Egypt have been incredible, and are things I will not soon forget.