Men's basketball struggles to claim wins in Hoop Fest, on the road 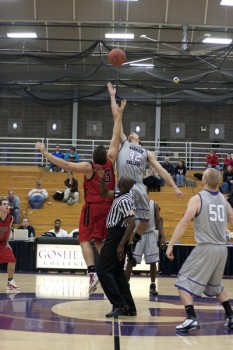 The Goshen College men’s basketball team traveled to Grand Rapids, Mich., on Tuesday night to face off against #11 NAIA DII Davenport University. Davenport presented a significant roadblock in the Maple Leafs quest to achieve a win after losing two straight games in the Maple City Hoop Fest this past weekend. In the end, Davenport proved to be too much for the Leafs to handle, topping them 82-73 and presenting Goshen with its third loss of the season.

In this past weekend’s tournament, Goshen fought against Concordia University in the first game, erasing a 14 point deficit to take the lead in the closing minutes of the game. Unfortunately, Concordia retook the lead by one point, and Goshen was unable to sink several last-minute shots to claim the win. The final score was 56-57. Nationally ranked Brescia University defeated the Leafs 44-67 in the following day’s consolation game.

Goshen performed slightly better against Davenport than they did against Brescia, taking an early lead and making several runs on the scoreboard in the face of a daunting deficit. Sophomore Austin Hefley hit a three-pointer in the opening seconds of the game, inspiring Goshen’s only hot streak of the game. Goshen pushed to an 8-4 lead in the first three minutes of the game, then lost the early lead when the Panthers went scored five unanswered points, then continued to press the Leaf’s with a 14-4 run. Goshen responded with an eleven point run, tying the game at 27-27 with less than 5 minutes remaining in the half. Davenport again responded to Goshen’s efforts, taking a 7 point advantage at 36-29 before heading to the locker rooms.

In the second half, Goshen failed to post points until about ten minutes in, allowing Davenport to extend their lead to 45-31. Goshen attempted several more comebacks, even getting within seven points again, before the clock ran out.

“I thought our overall intensity was much better than it was over the weekend. We simply ran into a very good Davenport team that has a lot of weapons,” reported head coach Gary Chupp in a sports information article “I did feel like we got pretty good looks offensively, but we have some shooters that are struggling right now.”

Goshen posted a meager 36 percent shooting on the night, hitting only 2-10 from long range. The Leafs did manage to improve this percentage by going 73 percent inside the arc during the second half.

The team will have a nine day stretch to improve their shooting before heading to the Bethel College Classic on Nov. 19-20. The Leaf’s will face Great Lakes Christian College in the first round of the tournament at 6 p.m. that Friday.