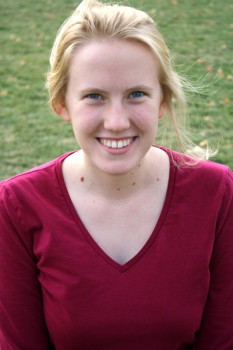 This poem was written for a Creative Writing assignment in which students took the form of a certain poem and add their own content. Borrowing from the form of the poem “Red Sugar” by Jan Beatty, Friesen added her own thoughts and stories.

with thanks to Jan Beatty

When I was young, I was a blackbird

and I flew under the shadow of my mother.

That was my life. I didn’t know until I was

thirteen that we carry others alongside us.

Not just the helpless, but those

that speak to us in ethereal languages

of melody and warbling. When I was

waiting, there came a cancer in my mother,

empty. I didn’t know it, but I knew

it was the wrong kind of change/so I flew.

With my inside body I see the pain,

the whites and the irises, it looks

that are flying, my red winged body

that shows me the brutal road to freedom,

the one good story, the one song

I know is mine. I heard it once

when I was dancing, something

made me turn my head, made me

swivel to look at a woman across

the room, wasn’t even my side,

but the red wings said, go. When I

saw her up close, I knew she was

true. I can’t explain this – I only met

her once. I said, Do you know

you are Mother Earth? Her face

Maybe her red wings told her to  –

but before she left, she looked into my eyes,

said, It’s not very easy, not at all,

but I tried. Two inches away from her

very pregnant belly, I said, okay, and both

our inside bodies knew it was real.

Some people call it intuition –

the way you glimpse at what you know,

then forget it – later it rises like a flock

of another species, feathered and insistent.

It’s the wanting that drives us and

halts us, the not asking/just knowing/

the blunt life/of the real

wind and the water flow/it’s mortal/

song-singing/the most liquid part of us/

resting in the song.