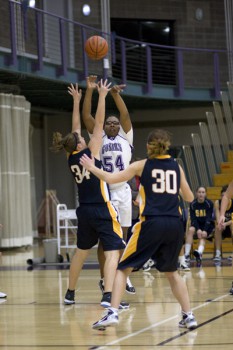 The Goshen women’s basketball team opened their conference play against Spring Arbor University last Tuesday. Unfortunately the Leafs weren’t able to keep pace with a hot shooting Cougar squad that shot 50.8% from the field and fell by a final score of 79-48.

Goshen began the game well as they took an early 11-4 lead. After missing some early shots, Spring Arbor used a 7-0 run to tie the score at 11-11. Both teams tried to pull away from the other but there was little give on either side as they combined for six three-pointers in a four-minute span. With the game tied at 22 all Spring Arbor eventually found a way to slow the Maple Leaf offense as the used a 9-3 run to end the half and enter halftime with a 33-25 lead.

The second half saw the Cougars come out hot as they opened with a 10-4 run to go up 43-27. Spring Arbor created multiple chances for themselves and made the most of them. They shot 59.4% from the field in the second half while Goshen managed just 30% on 9 of 30 shooting. The Cougars were also able to force nine second-half turnovers while giving the ball up just four times.

The loss puts the Maple Leafs at 2-7 on the season and 0-1 in conference play. Goshen looks to pick up some home court advantage as they start a four game home streak on December 4th.