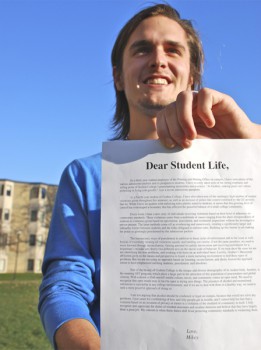 As a three-year student employee of the Printing and Mailing Office on campus, I have seen plenty of admissions packets sent to prospective students. I have recently taken note of the strong emphasis and selling point of Goshen College’s peacemaking mentalities and practices. “At Goshen, making peace isn’t about protesting or being a do-gooder,” says a recent admissions pamphlet.

As a fourth-year student of Goshen College, I have also taken note of the seemingly high number of student violations given throughout this semester, as well as an increase of police-like control exhibited by the GC-powers-that-be. While I have no qualms with enforcing rules plainly stated to students, it seems that this growing level of control has overstepped a boundary that has affected the peaceful balance of a small college community.

Every week, I hear a new story of individuals receiving violations based on their level of adherence to community standards. These violations come from a multitude of causes ranging from the sheer irresponsibility of students to violations given based on speculation, association and residential inspections without the investigative person present. The latter methods come off as overbearing and unnecessary, creating a significantly larger and unhealthy barrier between students and the folks obligated to enforce rules. Building up this barrier is not making the peace so glowingly proclaimed by the admissions packets.

The bureaucratic ways of punishment add to the issue as well. Instead of essentially treating all violations equally and handing out similar, if not the same penalties, we need to move forward through reconciliation. Getting arrested for public intoxication and receiving punishment for a housemate’s mistake are clearly two different acts on the moral scale of behavior. If we treat them the same we are not identifying the true problems and working with them on an individual basis. Luckily, Goshen’s Mennonite affiliation gives us the means and perspective to foster a more nurturing environment to deal with these types of problems. But we are not using an approach based on listening, reconciliation, and ideals. Instead the approach seems to emphasize catching students, punishment, and absolutes.

Part of the beauty of Goshen College is the unique and diverse demographic of its student body. Another is the amazing SST program, which plays a large part in the attraction of this population of peacemakers and global citizens. With a desire to find oneself amidst culture, travel and community comes an open mind. We need to recognize that open minds may in fact be open to trying new things. The presence of alcohol and recreational substances is inevitable in any college environment, and if we are to deal with them in a healthy way, we need to seek a more peaceful approach of doing so.

I am not arguing that alcohol should be condoned or legal on campus, because that would not solve any problems. I just yearn for a rethinking of how and why people get in trouble, and I cannot help but feel that a violation based on an invasion of privacy or rumor is a violation of the standard of community in itself. I fully recognize and appreciate the duties of resident assistants and resident directors and believe that they have largely done a great job. My concern is when these duties shift from protecting community standards to weakening them.