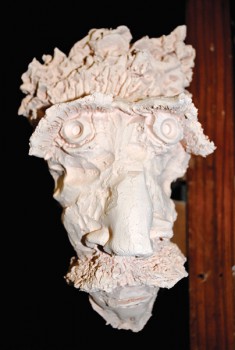 They say artists can find inspiration in everything, and that’s certainly the case of sophomore Tim Landes. Over fall break, Landes visited Windsor, Canada and met a man that later inspired him to do a sculpture piece.

“I saw this really old man,” said Landes. “He had a giant mustache, a big nose, and crazy-looking eyes.  I asked him if I could take his picture and all he said to me was, ‘I don’t speak English very well’ and then kept walking, looking into the distance,” said Landes. The man’s appearance and response intrigued Landes.

Although Landes admits to not being used to sculpting faces, he chose to make his sculpture an interpretation of the man he encountered in Canada. Landes explains that, as an artist, he likes to work with all types of materials, but on this occasion he decided to use ceramics. The piece is still a work-in-progress and needs to go under the procedures of bisque fire, glaze fire and then oxide stain coloring. While doing the artwork, Landes mentioned that he was thinking about the man. “He looked disillusioned, kind of lost. I tried to capture that with his eyes,” he said.