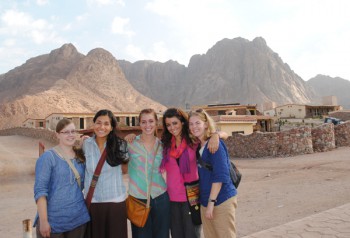 For my service portion of SST, I hopped on a plane and headed for Egypt’s neighboring country to the east, a wonderful place known as the Kingdom of Jordan. I did this upon special permission so that I could live with my father’s family in Amman while completing my service assignment. Though I’ve only visited the country once before, it feels like home.

Here in Amman, I’m volunteering in English labs at Al-Zaytoonah University which has around 8,500 students.  While 90 percent of these students are from Jordan, the other 10 percent come from the surrounding Arab nations including Syria, Palestine, Iraq, Saudi Arabia and the United Arab Emirates (UAE). The campus itself is similar to our own including several academic buildings, a gymnasium, a couple of restaurants and canteens, as well as an amazing soccer stadium. There is also a huge library (about five times the size of our own) that holds a large section of English, Arabic, French, and German texts.

Despite being in the middle of a desert terrain, the campus is scattered with trees and lush green landscape that is not only visually appealing, but also provides students with shade from the intensity of the sun. Though the trees are appreciated in this way, some students find them convenient for a different purpose.

As you all know, at Goshen we have what we call “Goshen dating;” here at Al-Zaytoonah they have “tree dating.”  Since dating before engagement is strictly prohibited in Jordanian (Islamic) culture, the university grounds often provide the only means of communication for people of the opposite sex.  If two students decide that they want to become a couple, the trees and shrubbery allow their relationship to be unrevealed to others that might inform the families. My friend, Maha, put it best when she said, “What happens under the trees stays under the trees.”  For the more advanced couples, there is also a “secret garden” option, though I was told that only the “worst” couples go there.

I say “worst”, but the fact is that the extent of the physical interaction between these couples doesn’t usually go past holding hands. In fact, if a man is rumored to have had sex with a woman before marriage, Jordanian law will force him to choose to either marry the girl or spend over a year in jail.  So, the majority of people steer clear of indulging themselves in physical relationships.

The Middle Eastern culture continues to surprise me in all its complexities and dense religious ideals. Though I don’t necessarily agree with them, I’m humbled by how content students are with their discreet relationships and their “tree dating.”  Here in Amman they truly believe in the saying that “less is more,” and there’s a simplistic beauty in that I can’t help but to appreciate.