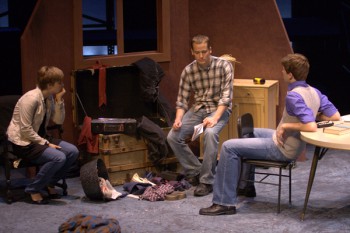 Patrick Maxwell and Patrick Ressler have a lot in common.  They share a first name, for starters.  They’re both seniors who have been heavily involved in the Goshen College theater department.  They both wrote a play this summer while studying abroad.  And both of their plays are being performed as the mainstage theater production this year.

The idea for a student-written mainstage began several years ago, at Ressler’s sophomore music composition recital, where he performed a scene from what would become “Home of the Trojans.”  Last year Caskey and Ressler proposed a 2010 Maple Scholars project to write a full mainstage with the intent of performing it the next year, but the proposal was denied.  Around this time, Maxwell’s interest in playwriting began to increase.

By spring semester of 2010, the idea of two shorter pieces performed in one mainstage production had taken shape.  Maxwell and Ressler agreed to work on their plays over the summer and send them in for approval.  Caskey agreed to direct.

Maxwell spent his summer participating in Goshen College’s study abroad program – Study-Service Term – in Senegal.  While remaining fully involved in the cultural experience, he also finished a draft of “Here Lies Hope.”  Maxwell describes his play as an exploration of human loneliness.

“I kept meeting people who somehow managed to be intelligent, outgoing, funny, warm, and welcoming, but still hated themselves,” said Maxwell.  “I wanted to write about a character like that, and since the people I’d met were women, I decided to have this character be a female character.  The rest of the story evolved around the character of Hope.”

Maxwell spent the month of September attending rehearsals and editing the script.  He says that some scenes were completely rewritten since rehearsals started.  On Oct. 1st, the final script was due and Maxwell took on a less involved role.

“I was struck by all the drama that presented itself in real life situations—I wanted to translate it to the stage. The Greek Mythology parallels just seem to fit,” said Ressler.  He has done fewer rewrites during the rehearsal process than Maxwell, having written many drafts over the summer.  Ressler is the musical director for “Home of the Trojans” and is responsible for teaching the actors the music.

Maxwell and Ressler aren’t the only ones doing something new this year.  “I’ve never been involved as director this directly with a playwright in rehearsals,” Caskey said.  “We’ve never done this before.  We’re crazy, but crazy in a good way.”