Wes Jackson to speak on agriculture measured by nature 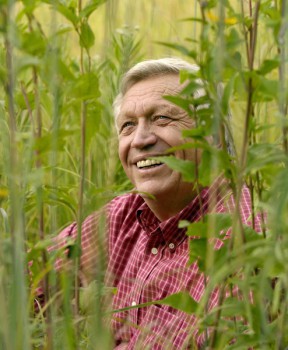 Wes Jackson, an activist for sustainable agriculture and president of The Land Institute, will speak in Sauder Concert Hall November 9th at 7p.m. Recognized by Smithsonian as one of “35 that made a difference,” Jackson will lecture about “The Necessity and Possibility of an Agriculture Where Nature is the Measure.” There is no cost to attend.

Jackson seeks to address the future of agriculture by looking at the past.

Years ago, a variety of plants and insects could be found in prairies. But now in fields across North America, farmers are growing only a single crop, a practice called mono-cropping. This way of farming creates an overabundance of one insect, because there is not a predator/prey relationship, said Paul Steury, coordinator of Merry Lea Environmental Learning Center.  Many farmers have sought to fix the issue of over abundance with pesticides.

As an alternative to pesticides, Jackson advocates for poly-cropping, or planting multiple plants interspersed, much like what would be found in natural prairies. This type of agriculture would restore predator/prey relationships and reduce the need for pesticides.

Jackson was named 1990 Pew Conservation Scholar, MacArthur Fellow (nicknamed the “Genius Award”) in 1992 and the Right Livelihood Award in 2000, which is also known as the “Alternative Nobel Prize.”

Jackson was a participant in the film “Dirt,” which was shown at the Farmer’s Market film series the second Friday of every month. He is also an author of books such as “Man and the Environment,” “New Roots for Agriculture,” “Altars of Unhewn Stone: Science and the Earth” and “Becoming Native to This Place.”