Back and Forth Contest Falls Leaf's Way 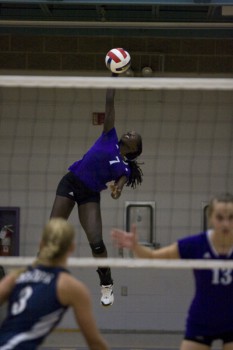 Visitors to the Goshen Recreation Fitness Center Tuesday night witnessed a hard-fought win for the Goshen College volleyball team against Mid-Central Conference foe Grace College. The match was a hotly contested affair which saw both sides struggle to pull away with two of the sets being decided by a mere two points. In the end, Goshen was able to pull away with a 28-26, 25-18, 15-25, 25-23 victory.

In the first game, Grace was able to open up an early 9-4 lead behind their two leading hitters Enrica Verrett and Dana Johnston. Despite the lead, Goshen didn’t lose faith and continued to fight back even when the score reached 21-24. The Leafs were able to put together a four point rally and took a 25-24 lead. Grace tried to equalize and fought off a pair of game points, but senior Brittany Herschberger ended their hopes with a kill as Goshen won the first game 28-26.

Goshen carried the momentum from the first game into the second as they took a quick commanding 6-0 lead. Freshman Stacy Wyse used a pair of sly tips to catch the Lancers off-guard and continued to keep the Leafs on top. A Peni Acayo block ended the game 25-18 and put the Leafs up 2-0 on the night.

Despite the 2-0 lead, Goshen came out flat in the third game. Managing just seven kills, the Leafs were unable to defend against the duo of Johnston and Rachel Bult as the Lancers hit .357 in a 25-15 win.

The fourth game was much like the first. Both teams traded points for most of the way with neither side able to establish superiority. Tied at 20-20 a Kate Yoder kill put the Leafs up one. Two points later Yoder recorded another to put the Leafs up 23-21. Herschberger was able to get the Leafs within one point of victory but Grace fought back to within one at 24-23. The game ended in similar a fashion to the first as a Herschberger kill finished off the Lancers 25-23 and the Leafs got a 3-1 victory on the night.

With the win, Goshen jumped Grace in the conference standings and improved to 11-9 on the season and 5-5 in conference play. Goshen travels to NAIA #9 Taylor this Friday where they will try to avenge a close earlier season loss to the Trojans.