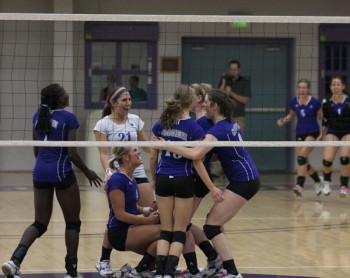 It came down to the wire, but the Goshen women’s volleyball team came away with a 3-2 victory over Bethel College in last Friday’s match. The win avenged an earlier season loss to the Pilots and marked the final regular season home match for the Leafs while also giving seniors Peni Acayo, Brittany Herschbeger, and Alicia Schwartzentruber one final win on their home court.

The first game saw Goshen jump out to an early lead, but Bethel was able to fight back it tie it 12-12. The two teams traded points until Bethel pulled away with a 20-17 lead. Goshen tried to sway the momentum back to their side but were unable to do so as Bethel won it 25-22.

Game two was a much different story. Goshen took an early 7-4 lead and eventually increased it to 18-6 as they continued to pressure the Pilot defense. Bethel didn’t have an answer for the Goshen attack that had 11 kills on only 29 attempts as Goshen took the second game 25-13.

The two teams split the next two sets as both were a back-and-forth struggle. The third game was tied 21-21 until three consecutive kills by Acayo put the Leafs up and they came away with a 25-22 win. Bethel was able to keep their hopes alive in the fourth game as they won 25-20 to force a fifth and final game to 15 points.

While the night was dedicated to the seniors, the fifth set belonged to sophomores Hannah Grieser and Kate Yoder. Back to back blocks by Yoder gave the Leafs another early lead at 5-1. In the end, Grieser and Yoder accounted for four of Goshen’s 10 kills in the final game helping the Leafs to an impressive .346 hitting percentage and a 15-11 game five win.

Acayo lead the team with 29 kills and hit .403 on the night along with 15 digs, three blocks, and two aces. Yoder posted a career high in kills with 16 and also added four blocks. Freshman Morgan Broderick led the Leafs in digs with 21, while freshman setter Stacy Wyse had a season best 54 assists.

The Leafs play this weekend in the Cornerstone Tournament before wrapping up their regular season on Nov. 3 against the University of St. Francis.