Flores calls for solidary through observing, hearing others 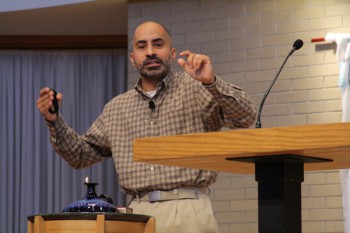 Anton Flores shared the reason he walked away from a career as a tenured professor to a lifestyle of solidarity with immigrants in a special chapel on Wednesday morning.

Flores, a former social work professor from La Grange, Ga., likened his calling to Exodus 3:1-10, highlighting that God “observed the misery of his people in Egypt and heard their cry.”

“The first step of a call to solidarity is to observe misery,” said Flores. For him, his moment of observation began when he and his wife decided to adopt a son from Guatemala. Their eyes were opened to the ethics of international adoption: stealing, buying and exploiting children.

He shared memories of watching a man shining shoes on the street in Guatemala – graffitied on the wall behind the man read the words “No more poverty.” Flores also shared a picture of a few men looking at a map of the U.S./Mexico border. The men were planning their multi-day-long hike through the desert; the dots that speckling the map marked where men, women and children had died en route.

Once immigrants arrive in the U.S., the jobs, names (such as “illegal” or “wetback”) and lower wages all lead to dehumanization –”a precursor to violence,” Flores said. If the government discovers undocumented immigrants they are detained, separated from husbands, wives and children, for a civil offense, not a criminal offense.

In the same way that Flores observed, he believes that through the Study-Service-Term program, GC students also have the unique opportunity to observe others in developing countries. Flores, who leads tour groups to Guatemala, noted a common reaction among participants in short term missions: gratefulness–which was met by many head nods in the chapel. According to Flores, observation can be done from a distance, while hearing involves engaging in activity.

Surrounded by families from various parts of Latin America, Flores heard. He left his career as a professor of social work, as well as the benefits and status that accompany such a position. Despite colleagues thinking he was crazy, Flores opted for a life of compassion (which means to suffer with, said Flores) among La Grange’s undocumented. Flores lives in an intentional community called Alterna, with families from Mexico and Guatemala.

In Georgia, Alterna offers reliable housing to immigrants at an affordable rate, a community garden, monitors court and detention centers to reduce injustice towards immigrants, among other ministries and services. In Guatemala, where many of La Grange’s immigrants are from, Alterna offers learning tours, and works in community development.

To learn more about Alterna, visit http://www.alternacommunity.com/. Flores will speak again in chapel tomorrow at 10 a.m. in the church-chapel.