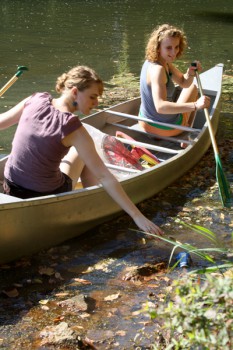 Last Sunday, Goshen College students and faculty gathered at the College Cabin to join the 7,347 different movements in 183 countries across the world for the 10/10/10 global work day, which echoes last year’s 350 celebration day.  The 350.org movement was started by Bill McKibben, author and environmental activist who visited GC in 2009, to highlight the importance of the number of parts per million of carbon dioxide that scientists say is tolerable for the atmosphere.  The movement also emphasizes the importance of awareness of the effects of carbon emissions on the atmosphere.

The event on Sunday, hosted by the student club EcoPax, began with environmentally-focused meditation, included time for painting and eating lunch and concluded with a trash pick-up competition with canoes down the Elkhart River.

Hannah Eberly, a sophomore and a leader of EcoPax, said, “The vibe of the day was appreciation.”

The warm weather made appreciation easier, but also reiterated potential global warming consequences as the temperature reached into the 80’s on the October afternoon.

Paul Steury, faculty advisor for EcoPax, said, “It’s about getting people to love this place, because once you love it you’ll want to take care of  it.”

Steury said environmental wellness isn’t about fighting climate change, but about reducing one’s carbon footprint, which is much easier because it’s a personal thing.

“Canoeing was doing both,” he said.  “We learned that there’s a lot of beauty  in Goshen that we need to make sure is cared for–and we did it with non-motorized vehicles, and then most walked back to campus from Shanklin Park [where the canoeing ended].”

More than enjoying some fun activities outside on beautiful day, the event was intended to be a form of social activism.  People wrote letters to state representatives as well.  Another aspect of the 10/10/10 work day was an effort to be a presence at the United Nations summit on climate change, an effort to reach a consensus on an international strategy to fight global warming.  The summit will be held in Cancun, Mexico at the end of November.  According to an article published in the New York Times on Oct. 8 by John M. Broder, the last UN summit on climate change, held in Copengahen in December 2010, failed to reach an international agreement to lower carbon emissions.

According to Eberly, EcoPax wants to continue to extend the spirit of the 10/10/10 work day throughout the year on campus.  Eberly named past and current projects supported and implemented by many other people in addition to EcoPax such as campus composting, converting to Mac minis (which produce less heat) in the Union computer lab, and lifestyle choices like biking or walking, spending time outside without electricity and unplugging electronics when not in use.

According to Glenn Gilbert, utilities manager and sustainability coordinator, the computer lab in the Union has normally been air-conditioned year-round to compensate for the heat generated by the computers.  Since the Mac-minis have been installed, said Gilbert, “we are now thinking/hoping that when the outdoor temperature falls below the mid-forties, we won’t have to air condition.”

Although it is difficult to know for sure exactly how much energy will be saved, two large pumps necessary to distribute chilled water will be turned off, resulting in a conservative estimated saving of at least $3,000 this winter on energy bills, on top of earlier calculations that showed that the Mac-mini conversion would save about $8,000 per year in electrical usage, said Gilbert.

The conversion has more than monetary benefits, though.

Gilbert said, “Perhaps a more interest currency then $11,000 dollars is the fact that approximately 80 tons of coal won’t need to be mined to power our computers this year or over 200 tons of CO2 won’t contribute to global warming as a result of this change.”

Last year, the school’s electrical consumption was the lowest it’s been since the 1992-93 school year, according to Gilbert.  These changes will only help our energy consumptions for the upcoming year.