On being ‘part cow’ 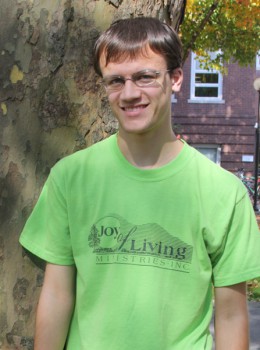 I am part cow.

No, I’m not talking about the genetic code or an unhealthy steak diet. I mean that I have a living active piece of cow completely incorporated into my biology that will probably add 40 years to my life.

This summer I had open heart surgery. For you nursing and biology students: I had a pulmonary valve replacement with 29mm perimount bioprosthetic heart valve and a tricuspid valve annuloplasty. For everyone else: the doctors cut me open, inserted a piece of cow into my heart, and closed me up again. O.K., it isn’t that simple, but it sounds cooler that way. I play it down because I’m not sure I can do justice to the incredibly complex and difficult procedure that preemptively saved my life.

I was born with congenital heart disease, which basically means that my heart was screwed up and I would have died if it wasn’t for the quick thinking and steady knife of several courageous surgeons.  The main problem was that my pulmonary valve, which works as a kind of flood gate for blood leaving my heart, was malformed and stuck closed, blocking the flow. The doctors created a bypass around the valve in one surgery and removed it completely in a second.

Since then I have lived without a pulmonary valve and my heart has had to work extra hard to move blood properly. In the past, according to my doctor, people with my condition rarely lived past their mid-thirties because the heart grew so large from all the extra pumping that it failed. The solution is to insert an artificial or bioprosthetic valve where mine should be. This allows my heart to return to normal size and function.

And so, four weeks before my return to Goshen College, I found myself at the Cleveland Clinic facing the knife. I don’t remember much about the first day or so after surgery because I was seriously tripped out on pain medication. (Having your chest cut open isn’t exactly a painless surgery. In the following weeks sneezing, coughing, and even laughing hurt.)

What amazed me was how quickly I recovered. I only spent five days in the hospital and after just two months I feel awesome. Sure, the twelve-inch scars ruin my chance to be America’s next hot model, but then again, that isn’t much of a loss. I can run, play, and laugh because of miracles both this summer and almost 20 years ago.

Ultimately I have to acknowledge God’s hand in my story. I would be a fool to explain it any other way after seeing what happened and witnessing the multitude of people who prayed for me. Before surgery, I had a wonderful feeling of peace that I can only attribute to the work of God.

Perhaps it would due to end by thanking the cow for sacrificing its valve to fill the void in my heart. To you, Clover, wherever you are in the world of bovine, I offer my modest thanks.