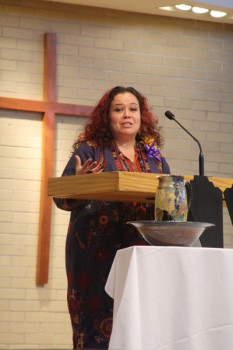 Seven alumni were recognized for their wide range of accomplishments last Friday morning, October 1st, when they were presented with the Culture for Service Awards, the Decade of Servant Leadership Awards and the Champion of Character Awards in the Church-Chapel.  Though their work varied from doing mission work around the world, to working as a public interest lawyer, to helping artisans around the world, these seven alumni each continued to practice the core values they learned during their time at Goshen College.

Special pieces of pottery by Marvin Bartel were presented to Wilma Shank (’46), David A. Shank (’48) and Wilmar Stahl (’71), all recipients of the Culture for Service Award.  This award was initiated in 1989 to recognize alumni whose lives embody the College’s then-motto.

The Shanks have spent much of their lives doing mission work around the world, including 10 years spent in West Africa.  All the while, David wrote his dissertations about the Prophet William Wade Harris (considered one of the most significant African religious leaders), received a doctorate from the University of Aberdeen in Scotland and wrote a book entitled, “The Prophet Harris: ‘Black Elijah of West Africa,'” which was published in 1994.

Pieces of jewelry, handcrafted by Judy Wenig Horswel, retired professor of art, were presented to Nancy Chupp (’87) and E. Cristina Hernandez (’00).  Chupp received the Culture for Service Award and Hernandez received the Decade of Servant Leadership Award, created in 2004 to recognize an alumnus or alumna whose contributions and achievements prior to his or her tenth class reunion are worthy of recognition.

After graduating from Goshen with an interdisciplinary major, Chupp applied all areas of her focus (political science, religion and women’s studies) into her career as a public interest lawyer in Seattle.  Chupp specifically deals with religious-based employment discrimination and female prisoner civil rights.

Chupp said on Friday when she received her award that some of her clients are Muslims whose employers accuse them of worshipping the devil and aren’t allowed any accommodations for short prayers throughout the day.

“We provide legal services for those who couldn’t otherwise afford it,” she said.  “I think this represents the Mennonite values that  I learned during my time at Goshen College.”

Hernandez currently works helping women artisans in Kabul, Afghanistan, but has previously worked in Honduras, Vietnam and Bolivia.  So far in Afghanistan, she helped start a center for women to learn about product design and business export development.

After receiving her award on Friday, Hernandez said, “The Afghanistan I know isn’t tainted by the war, but is defined by the men and women there.”

Because she is a Honduran native, her physical similarities to Afghans allowed her to be more easily embraced and welcomed.  Now she helps women fulfill dreams by starting family businesses specializing in jewelry, embroidery, textile, felt and wool rugs.

“Alongside the work we do, my brothers and sisters have taught me courage,” she said.  “We shouldn’t feel sorry for them… we should just no longer feel comfortable to remain in our self-made boxes.”

The recipients of the Dr. Ruth Gunden and the Dr. Roman Gingerich Champion of Character Awards, created in 2005 to recognize a male and female alumni athlete who exemplifies the college’s core values in their lives, were BJ Leichty (’75) and Dan Bodiker (’64).

Leichty played basketball and studied social work while a student at Goshen.  Through her positions as administrative assistant and assistant principle at a high school in Oregon, she became very involved in the school through teaching a typing class, co-leading a small group for students and volunteering to chaperone, among other things.  After moving back to Elkhart County, she became an associate pastor in 2004 and was ordained in January 2010.

Bodiker played baseball and soccer while at Goshen and studied physical education.  After graduation, he was hired at Bethany Christian School in Goshen and began the entire athletic program for the high school.  He served as a coach, teacher and athletic director for 43 years.  He also taught driver’s ed, including driving lessons for many Goshen College international students so they could get a U.S. license.  He retired three years ago, although he still works part-time at Bethany.  The baseball, soccer and softball fields at Bethany were named Bodiker Athletic Fields in his honor.