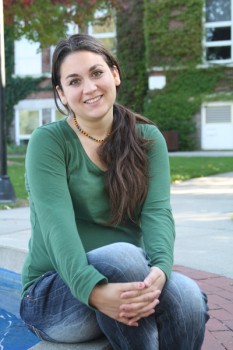 It’s 3:30 a.m. and our dog Bruno has started to bark very loudly. After taking a second or two to wake up, I decided to get up to see what was going on with him. All of a sudden, the earth began to tremble. I woke up Cristian, my husband, and sat up to get our dog.  I start walking towards the door, but in a matter of seconds the earth started to shake like I’d never felt before.  I tried to walk to our living room, but I couldn’t seem to stand up; it was like trying to stand on a roller coaster. I crawled over to get our dog and crawl back to the bedroom where my husband was. I locked the door, sat on the floor and start to cry. The earth was shaking much harder. Crying, I yelled to Cristian, “This isn’t normal!” He told me, “Come sit on the bed,” but I didn’t understand what he meant.  I sat there crying, getting more hysterical by the second. I told Cristian we were going to die, that I love him. He shouted back that we wouldn’t die. Was this it? The end of the world? My only thoughts were towards my husband and our family. Everywhere you could hear glass breaking, heavy things falling, car alarms going off and people screaming with  piercing pain. I needed to be near my husband so I crawled my way to the bed and hugged him while I cried.

The Chilean earthquake of Feb. 27 2010, lasted three and a half  minutes. It was the fifth-largest earthquake in the history world. In the Richter scale it marked 8.8. Haiti’s was 7.0.

Chile is an earthquake-prone territory. Everyone knew that between 2009 and 2011 there would be a major quake.  We just didn’t know exactly when it would happen. Since we are well prepared for these situations in Chile, people have some idea as to how to react. But no one was prepared for something like this. Many poorly constructed houses and buildings rapidly came down. In the south of Chile, the earthquake was followed by two tsunamis that finished destroying the few houses that were still standing. More than 80% of the people who lost their houses were still paying them, and now they pay for nonexistent houses.

Many people called it an “emotional quake.” It might have destroyed endless structures, but still our spirit was not broken. Situations like these force you to put things in perspective. My husband and I, our families, our compatriots, we may have lost many things, but still to this day we work hand in hand to rebuild our communities.