Fall kickoff 'out of this world' 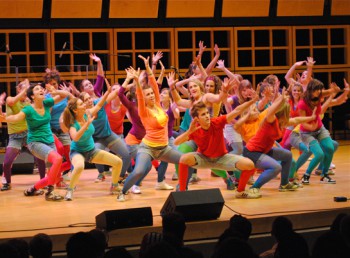 Hundreds of eager Goshen College students packed themselves into Sauder Concert Hall Friday evening for the Fall 2010 Kick-off. This year’s theme was “Goshen Goes to the Moon,” which was quickly apparent in Campus Activities Council’s opening “Space Jam” routine.  Traditionally, CAC has instigated a theme for each Kickoff and hosted the show in addition to their year-round duties planning campus events and hosting hour-afters. Friday evening’s talent show displayed a variety of student talents including a whirlwind of 80’s dance hits, a vampire love story, vuvuzelas and an epic cello solo.

The winning act of the evening was a cello quartet called “Chell Yeah!” who preformed a dramatic rendition of the “The Final Countdown.” The cellists were Justin Yoder, Hannah Bartel, Laurel Woodward, and Levi Smucker, all sophomores.

“We wanted something ‘fierce’,” said Woodward. “So this fall, the four of us worked together to arrange a cello quartet version of the piece (The Final Countdown).”
Woodward added, “Emma Ruth is actually the mastermind behind our (group) name. I feel that “Chell Yeah” really accentuates the energy and creativity of our group.”

Other highlights of the evening included the vocal stylings of The Dynamics, a mixed a cappella group, and “The Safety Dance,” perfo

After Kick-off, students were invited to stick around and attend a dance party and T-shirt give-away hosted by the CAC in the Kratz/Miller/Yoder Connector.