A 'mini SST' in Guatemala 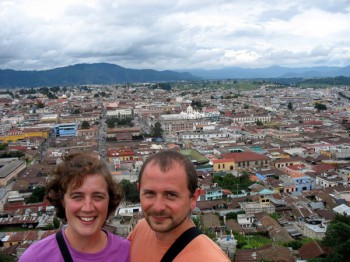 In an effort to make a connection with the Latino culture, Goshen College’s Center for Intercultural Teaching and Learning has offered individual grants to faculty and staff members for a Summer Spanish Language Study.  From June 29 to July 26, Jodi Beyeler, news bureau director, decided she would take this opportunity to head to Quetzaltenango, Guatemala.

Although there are many Spanish-speaking countries to choose from, Jodi decided she would return to Guatemala. “I went there for two weeks when I was in high school,” said Beyeler. “Dean Rhodes, who is a Spanish professor here, had been my Spanish teacher then and he took us at that time.”

Quetzaltenango is the second largest city in Guatemala with approximately 300,000 inhabitants and is four hours away from the capital, Guatemala City. “It’s not as populated as Guatemala City,” explained Beyeler. “It doesn’t have as much pollution nor as much crime as the capital, so I was really attracted to this place up in the mountains. There are other cities that have a strong language program, but it’s kind of over-run by gringos,” she laughed.

In an intense study schedule, Beyeler attended classes with a teacher Monday through Friday for five hours each day. The school arranges for their students to live with host families, a place where Jodi learned about the Guatemalan family culture and dynamics in a personal way. “They took care of all my meals, in the afternoons or on the weekends they provided field trips if I wanted,” said Beyeler. She had the chance to travel to the Pacific coast, to a coffee plantation, to the oldest Catholic Church in Central America, to a chocolate making business, to visit a Mayan midwife and to Lake Atitlan.

“They provided opportunities to learn about the culture and the history, very much like a three and a half week mini-SST. I felt that, like them, I studied a language, a culture, lived with a host family and did some service,” said Beyeler.

Beyeler stayed with an evangelical host family, Samuel and Rosa Ixtabalan, and their children: Cindy, Willy, Wendy, Gaby and Samuelito. “The interesting thing was that they lived in a kind of compound in the city. You would go in the gate and there lived five different families, but all of them related to each other,” Beyeler said. “It was fun to have near my immediate family and then the extended family also.” Beyeler’s host family regularly receives foreign students and part of their income comes from this.

Beyeler even ran into a familiar Goshen College face during her travels. One morning she was waiting at the bus station in Guatemala City and saw Ben Hoover, a 2010 graduate who was studying Spanish all summer in Guatemala and returning from a week-long trip. “A small world,” she said.

Jodi reflected on how this adventure impacted her life, with its very positive and interesting outcome. “There were often times when I would be sitting there, not having a clue of what was being said, and they were talking really fast. This creates an opportunity to not take yourself too seriously and be open to humor,” said Beyeler. “There were lots of opportunities for laughter.” She said the trip reminded her what it’s like to be a newcomer, someone who doesn’t really know what’s happening.

Part of returning from Guatemala meant linking the new experience to life in Goshen. “I tried to think about what it means here, in our country, for new people, people who are struggling to find their place and what are ways that I can reach out to people like that,” said Beyeler. “Sometimes it could be explaining things, show someone around, share food together or laugh together. Laughing breaks down any sense of barriers between people.”