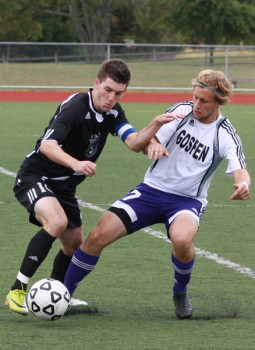 The men’s team was happy to put an end to the four game losing streak that started the season. Goshen shutout both teams, beating Bluffton 5-0, and EMU 1-0.

The team took an early lead against Bluffton, when Julian Sider, a junior, picked up a pass from sophomore Daniel Diwa, and put it into the back of the net from ten yards out. Twenty-two minutes later, Greg Thiessen, a junior, struck gold with a thirty yard rip. Despite their lead, the team lost no steam in the second half, allowing  Alain Chaponniere, a junior, Jake Driver, a freshman, and Charlie Frederick, a junior, to tack on points.

“We knew coming out that if we played together as a team, with quick passing, we would be able to do well. Even from the outset, it was clear that we were the better team and the goals would come,” said Thiessen. “ We played aggressively on the attack to try and open up holes in the defense and it paid off several times.”

The Sunday morning game against EMU was a bit more of a challenge. EMU played a patient possessing game, allowing Goshen fewer opportunities on goal. The Leafs caught a break in the 39th minute when Thiessen picked up his second goal of the weekend. Jacob Yoder, a freshman, made a quick impact with the assist coming only two minutes after he subbed in.

The Lady Leafs had a bit of a rockier of a start in Pennsylvania. They recovered from a 1-0 loss against Bluffton to beat EMU 1-0.

“Statistically we outplayed Bluffton.  They were still able to gain a win by placing the ball in the net,” said midfielder Tahnee Delp.  “This was very frustrating loss for the team to deal with, but we looked forward to our game against EMU the following afternoon. We mentally prepared for the game and put our loss against Bluffton behind us.”

EMU and Goshen both had five shots on goal, but Goshen clinched the win with a 76th minute strike from Julia Miller, a sophomore.

“I think we look a lot better this year. We have gained more speed, better ball control and are getting good runs,” said Miller.

Following the weekend, the men’s team stands with an overall record of 2-4-0, while the women are 2-2-0.