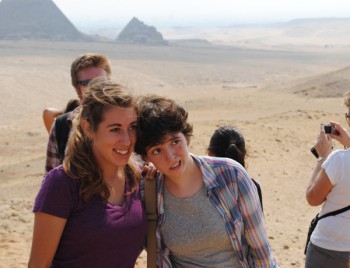 Those of you who know me well know that I have a disturbingly keen imagination. Therefore, as I was vainly trying to mentally prepare for my travels this semester, I definitely spent a decent amount of time trying to imagine Egypt’s best known tourist attraction, the Pyramids of Giza. I had it all laid out oh-so-romantically in my mind: a vast expanse of sandy desert beneath a cloudless, azure bowl of sky into which the great stony pyramids stretched, proof of the human mind’s capability to achieve feats of truly epic proportions.

Well, yesterday we all piled onto a bus and bounced like a Super Ball all the way through Cairo. If I remember correctly, I fell asleep ’round about halfway through the bus ride. When I woke up, we were still in the city. “Bah!” Thought I. “No time has passed! We’ll be stuck here forever!” And then blam. There they were. Ridiculously huge stone masses of human ingenuity growing out of the ground about 60 seconds away from the edge of the city. I suppose they looked just as I’d imagined them to look, but their location wasn’t nearly what I’d expected.

I was surprised by quite a few things:

1) The number of Egyptians there. Granted, it was a holiday (post-Ramadan feasting is like Christmas, New Years, and Thanksgiving combined, you see), and tourist season hadn’t quite gotten off the ground yet. Even so, I was surprised to run into equal numbers of silly foreign families and shebeb (loud, obnoxious boys especially gifted in the areas of whistling, hissing, hair-greasing, and being generally offensive using their grossly limited English vocabularies). I suppose it’s not all that surprising, however; when one of the wonders of the world is literally just beyond your back door, why not?

2) The lack of peddlers trying to sell things to poor naive persons clearly from abroad (that’s us). This had a reason as well–the President of Ecuador was on his way (no, I never got to see him) and all the peddlers were shooed away. I ran into them later, however, when they started hurling long chains of postcards at our faces at very unexpected moments and rattling tacky scarab-bead chains in our ears. Even if I’d never seen kitsch, I’d have known that’s what it was.

3) The ANTS. They were like spiders. They had the longest, spindliest legs I’d ever seen, which made them look like they were short a few. They were much more chivalrous than their smaller feistier counterparts, however–small ants here bite hard.

Some of us went into the only pyramid into which the general public is allowed. It was almost unbearably hot, which was also unbearably fantastic since we became instantly five minutes younger due to the metaphysical properties of the tomb (which can apparently keep foodstuff fresh and sharpen dull knives).

We also got to see the Sphinx, a funeral boat made to carry a Pharaoh to the afterlife; a whole entire burial temple complete with its own stadium (just in case the dead pharaoh wanted to go through the Olympic-scale sporting events it takes to get recrowned in the afterlife) and a gargantuan statue of Rameses II, who had the kindliest face and most impressive calves imaginable.
Each of those things has its own tale, however I am afraid I have run out of time and also, quite likely space.

Goodbye, my friends. I miss you “owie owie kiteer.”

Over and out,
Elspeth