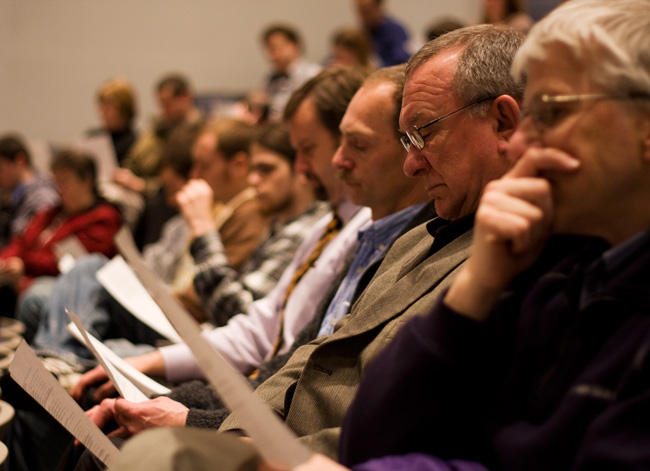 Audience members look over the planned announcement about Goshen's peace stance to be read before certain sporting events. Photo by Martin Brubaker.

Goshen College President Jim Brenneman led campus-wide discussions on Wednesday about the prayer that is to follow the instrumental version of the national anthem played during sporting events.

It was recently announced that the Peace Prayer of St. Francis of Assisi will be the prayer of choice to follow the anthem. Other details that have been decided are that a U.S. flag will be present, but not permanent, during the event and a statement is to be included in all sporting programs. The statement will address each of Goshen College’s core values in relation to the Anabaptist’s pacifistic beliefs and invite spectators to respectfully acknowledge the national anthem as they feel comfortable.

As the floor opened for discussion, students, faculty and staff each spoke their mind. Some questioned the decision process and wondered what will make Goshen different than any other Christian college.

“What will distinguish [Goshen College] is how we’re able to engage difference in a respectful manner,” Bill Born said.

Logistically, making an announcement and praying a prayer at outside sporting events aren’t as simple as they may seem.

“Typically there are no announcements,” said Tim Demant, Goshen College athletic director. This means the Athletic Department will need to find a sound system for the premiere of the national anthem and prayer that is scheduled for March 23.

Demant said, in reference to the fans, “I am hoping that they will be respectful and expect to see great ball games.  After all, that’s what the game’s actually about.”

Grant that I may not so much seek to be consoled as to console;
to be understood as to understand;
to be loved as to love.