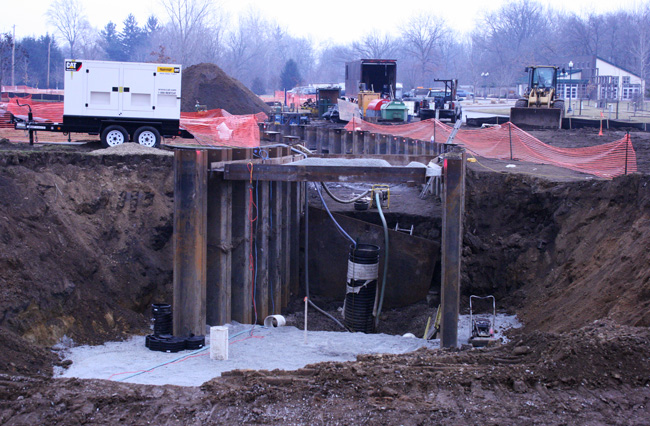 The south entrance for what will be a pedestrian underpass crossing under Plymouth Avenue/State Road 119 in Goshen. Photo by Dietrich Eitzen.

Plymouth Avenue near the Millrace Canal has been closed since March 1 to allow for the construction of a pedestrian underpass.  Plymouth Avenue, which is also State Road 119, is closed to all but local traffic between Main Street and Indiana Avenue for 60 days, shifting the traffic north to Pike Street.

The underpass is a safety improvement project to guarantee safe pedestrian crossing across S.R. 119 on the Maple City Greenway Trail System.  In a letter to The Goshen News, Mary Cripe, Goshen civil city engineer, said that in 2001, the average daily traffic on S.R. 119 was 12,890 vehicles per day.  An Indiana University study conducted in Oct. 2001 reported that the average bicycle-pedestrian traffic ranged from 211 to 447 crossings per day, with the highest hourly traffic at 162 crossings per hour.  Therefore, bicyclists and pedestrians have had difficulty crossing S.R. 119.

According to critical infrastructure management by Sinisi Solutions, the entire project, with construction costs of approximately $1,655,000, is being funded with federal money from Congestion Mitigation and Air Quality funds.  Cripe said the funds are federally allocated and cannot be used for food, housing or healthcare.

In addition to traffic detours, the water in the Millrace canal was lowered for the project.  Because of this, the project had to be completed during the school year (interfering with students walking to Goshen Middle School) to ensure that the canal will be refilled in time for fish spawning season.  According to Mayor Allan Kauffman, in an interview with The Elkhart Truth, it was a requirement of the State Department of Natural Resources.

Although the decision was controversial among city council members, the plan for the underpass was approved last year with the mayor’s tie-breaking vote.