The first half was a bit poor with both teams having trouble making their shots. The Warriors went 8 of 21 from the field with the only 3 pointer of the half.  They took a 25 to 20 lead at the end of the first period with Goshen making only 7 of 27 from the field and failing to put any 3 pointers in before the period. 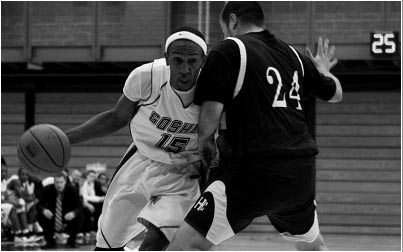 Nate West jukes an Indiana Tech player in the Leafs’ Nov. 28 contest against. The Leafs lost by one point. Photo provided by the Sports Information Department.

In the second period, Goshen started pulling a comeback with some help from Junior Jeremy Pope as he contributed his 16 points in the second period.  “I just felt comfortable after I was able to make my first bucket and from there on, it all just started to click,“ said Jeremy Pope about his solid game off the bench as he led the team with 18 points.

As the second period was coming to a close, Goshen was able to take the lead and the game in the final seconds Senior Errick McCollum had a one on one and drove to the basket for a layup but passed at the last second as the Warriors were able to deflect the pass as time ran out. Thinking back on the situation, McCollum said, “I should have pulled up and shot a jumper. If I get in that situation again, that’s what I will do next time.”

Although the Leafs suffered a loss to the Warriors, they have been recognized by the NAIAA. Goshen College received votes in the national rankings after two impressive upsets against Grand View and Indiana Wesleyan both ranked in the top ten in the nation.

Now 6-3, the Maple Leafs will play conference rivals Bethel College ranked #2 in the nation as Goshen looks to upset the conference co-champs on December 5. The game will be held at 3pm in Mishawaka, IN.