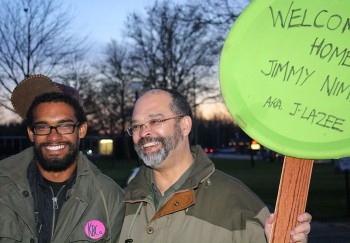 James Green (left) and the rest of this fall's Peru SST unit were welcomed home, Tuesday, by family and friends with warm hugs and colorful posters. Photo by Martin Brubaker.

Last Tuesday at 5:20 p.m., the fall Peru Study-Service Term (S.S.T.) unit returned to a crowd of eager friends and parents waiting at the south side of the Union.  After three months of living in Lima, Peru’s capital city, and various villages in the Andes mountains, coastal towns and the jungle, the group of 11 students was greeted with the rather contrasting Indiana landscape upon their arrival.

The group arrived almost two hours later than the original estimate of 3:30 p.m. due to a last minute change of travel plans for one member of the group.  Not until the group arrived in Miami did they realize that the student changed his original flight plans

Jerrell Richer, associate professor of economics, along with his wife, Jane, and four children led this group during their time in Peru, and will continue to lead the Peru S.S.T. groups for the 2009-20010 school year.

Different than years in the past, language classes, lectures and workshops for the study portion were held in Lima’s only Anabaptist church, Comunidad RETO Internacional Lima (translated as the International Community of Total Reconciliation in Lima).

The group’s time in Lima involved learning Peruvian culture, politics and history, through various field trips in and around the city.  This included trips to the Museum of Archaeology, Anthropology and History, Pueblos Jovenes (meaning “young cities,” impoverished cities in the outskirts of Lima) and Machu Picchu, the most-visited tourist destination in South America.

During the service portion of the term,  students were spread throughout the country to serve in seven different locations in the mountains, coast and rainforest.

After six weeks of service, the group reunited back in Lima just in time to share a Thanksgiving meal together.  The meal consisted of traditional North American food, such as turkey, mashed potatoes, green beans and (white) pumpkin pie.

This was the tenth group to complete an S.S.T. in Peru.  The next group will leave for Peru in January.