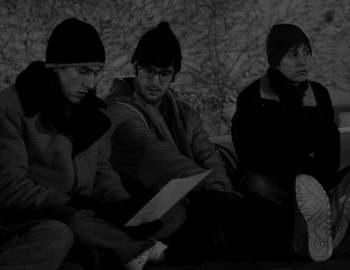 Students met in Shrock Plaza last Monday for a service of prayer and mourning in honor of the victims killed by graduates of the School of the Americas. Photo by Emily Miller.

A few weeks ago on Yoder 2, several students were lamenting the cost of tuition.  One of them brought up that he had considered joining the army, because it would take care of the cost of college.  His friend asked him if he would be able to kill a person.  The student responded with resignation in his voice that “if it was me or them, I probably could.”

Maybe the willpower to kill a person is a talent, or maybe it’s not.  However, one thing that’s certain is that there are skills and strategies to efficiently killing a person or completing an effective military campaign.  These abilities are taught to foreign military personnel at the School of the Americas (SOA).  Many graduates of the school go on to commit human rights abuses and unspeakable acts of violence in their home countries.

On the evening of Monday November 23, over 30 Goshen College students and staff gathered to mourn for the people who had been killed and tortured by graduates of the SOA.

This vigil took place in Schrock Plaza.  The participants stood in a circle around many small candles spread across the brick pavement like the milky way.  Flickers rippled among the small flames as cold breezes blew through the crowd.  However the temperature did not distract the people assembled.

The event began with a brief description of the School of the America’s, which is located in Georgia.  The school is run by the US military, and although it recently changed its name to The Western Hemisphere Institute for Security Cooperation, protesters still refer to it as the SOA because the purpose and methods of the institution have not changed.  The SOA Watch is an organization that monitors and holds protests against the SOA, which Goshen students have often participated in.

People at the Goshen vigil received crosses with the names of some victims, and their names were read, the mourners responding with the Spanish word for present, “presente,” as a funeral dirge.  Then after a time of silence and a prayer to close the SOA, the group was led by Daniel and Juan Moya in several songs.

Everyone was invited to sign petitions and letters to government representatives, asking them to take action regarding the SOA.  The gathering ended with a prayer written by the Arch-Bishop of El Salvador, Oscar Romero, who was assassinated for speaking against human rights violations.  His words speak for themselves.  “Let those who have a voice speak for the voiceless.”