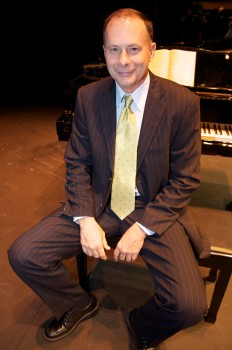 Carl Haarer's stories of his father's college time, his own decision to be a reporter and why he incorporates poetry into his news reporting on radio WBZ in Boston. Photo by Angelica Lehman.

Carl Haarer, one of Boston’s top radio reporters, can play the guitar and piano, sing, write poetry and speak theology. He did all these things – and talked about journalism — on Tuesday in his Umble Master Class keynote address.

Haarer, who works for WBZ, said he had no idea he would become a journalist when he graduated from Goshen College with an English major in 1979.

He described his job as a radio reporter as similar to being a student: you listen, learn, process and try to find meaning in new-found knowledge. The key, he said, is to be awake.

“There’s always something greater than what we see and what we hear,” said Haarer. “We just have to be awake enough to see and hear it.”

Over his years as a reporter, Haarer has seen both joy and tragedy. Regardless of the situation, he believes God to be ever-present. When covering a house fire, he said,“I have to believe that in those ruins, in the walls of that charred house, that God is there.”

Haarer told the story of Tiffany Moore, a 12-year-old girl killed in the crossfire of a gang shooting. After she died, her mother, Alice, would stand for hours at the place she was shot—the blue mailbox on the corner.

“Something like that creates its own music of sadness,” said Haarer, .

Haarer incorporated piano and guitar music into his lecture. He played on guitar “I’ve got my feet, I’ve got my shoes,” a song he wrote for the Moore family. He also played on the piano the hymn from which he drew the title of his lecture: “Breathe on me, Breath of God.”

Whether covering the killing of a child like Tiffany or the death of a firefighter like Steve Minehan, who went into a burning building in search of trapped colleagues and never returned, Haarer said he poses the question: Where is the Kingdom of Heaven in the moments of darkness on earth?

“Regardless of the moment in which I find myself, I always feel that there’s something greater than the headlines that are spilling out,” said Haarer.

Haarer read excerpts of poetry throughout the lecture. On-air reporting doesn’t mean just stating the facts, he said, but sometimes also providing an additional commentary through Dr. Seuss-like poetry. Events such as the Super Bowl, the championship season of the Boston Red Sox, visits to Mother Teresa or a beer summit at the White House Rose Garden have all inspired poems.

Over 50 years ago, Haarer’s father, David, took the Umble Center stage and gave a speech talking about the importance of roosters to farmers. Haarer recalled the image.

We are all farmers, he said, but we can’t do our work of sowing and reaping the soil if we’re asleep.

“Thank goodness for that rooster within us all, that spirit, that clarion that forces us to be awake,” said Haarer. “A new day is always dawning, but you have to be awake, alert, for God is always breathing.”