Beyond the Bubble: Daniel Moya 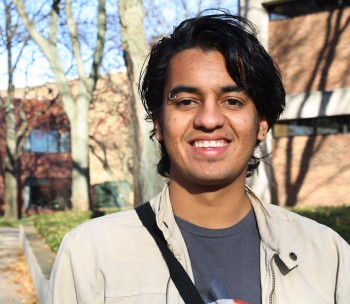 Forced displacement is a social reality that I have always been exposed to. I am from the beautiful country of Colombia, and it is painful to see how violence has broken our society into pieces, as it finds itself emerged in a fifty year armed conflict. It is a very real issue that is directly affecting at least 3 million Colombians today, and indirectly even more, as family ties are broken, land is taken over, and respect for life is lost, disrupting and dividing Colombian society and the neighboring nations who serve as second and third places of refuge. I have made several relationships with Colombian refugees in Ecuador. These are brothers and sisters that find themselves in situations of despair, coming with the few clothes they have left into a new country where their adjustment is a slow and torturing process as they try to find ways to make a living for themselves. The flow of about 135,000 Colombians into Ecuador has instigated discrimination and prejudice, as both societies find themselves competing to survive in the context of poverty.

This was the subject of the UN-MCC Student Seminar that took place in New York in late October. The focus of the seminar was displacement in Iraq, the Congo, and Colombia.  We got some insights into how the United Nations, as an international organization, is responding to this critical issue. However, I will speak from personal experience on what is being done by faith based communities:

My home congregation, Iglesia Menonita de Quito, in Ecuador, is a small but very active congregation that has received dozens of Colombian refugee families throughout the years. The congregation has provided a community of support (spiritual, economic, psychosocial) to a people that have been separated from their relatives and their material possessions. The church has also provided a place where the boundaries are erased, allowing Ecuadorians and Colombians to make deep, long lasting relationships in which they are humanized by acts of compassion, solidarity and friendship. Children start making friends with other Ecuadorian children, and entire families, both Colombians and Ecuadorians, begin to be transformed, as they realize that God has taken an option for them; an option embodied in their neighbors who become their new family. Real change is happening where people agree to live by each other, caring for each other so that no one goes hungry. Lives are transformed when grassroots communities commit themselves to processes of humanization. These networks of relationships can mend the most divided societies.

The Mennonite church in Colombia is also doing great work as a response to armed conflict and displacement. Through entities like Justapaz, the Colombian Mennonite church is an active body that plants seeds of peace by guiding churches and their leaders in their process of becoming “sanctuaries of peace”, by directly intervening for the prevention of child recruitment by legal and illegal armed groups, by responding to the needs of displaced people, and by advocating for conscientious objection.

International organizations help us get a grasp on the impact that violence has on groups of people, but it is truly at the grassroots level that we get a grasp of possible and effective peace-building.

I deeply encourage you to get informed about what is happening just south of this continent. Colombia has one of the largest internally displaced populations, yet little is known about this critical social reality. Be aware that negligence is contributing to the policies that foster violence and create displacement, especially in Colombia.