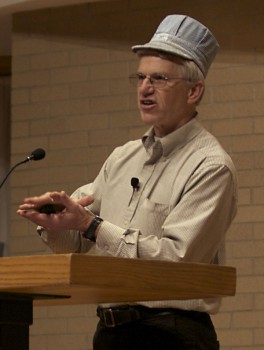 Students were held rapt during Monday’s convocation as Glenn Gilbert, Goshen College’s Utilities Manager and sustainability coordinater, walked onstage wearing a conductor’s hat and poured roughly fifty pounds of coal from a metal trashcan. He strode forward and announced: “This is coal.”

He then turned off all of the lights in the chapel and opened the blinds, allowing the current-day sunshine to break in and provide all of the light. Why use ancient sunlight when we can use today’s?

Gilbert then proceeded to illustrate Goshen College’s addiction to coal both historically and in the present day, using easily understandable examples. For instance, the college’s electricity usage in two weeks equals roughly one train car full of coal, which is about twenty seven cars of coal a year. Think about that next time you’re stuck behind a train!

Gilbert also showed a clip from the documentary Burning the Future: Coal in America, which showed the devastation that mountaintop removal coal mining brings. According to the documentary, coal mining is a nasty, but currently necessary system that we perpetuate through our constant use of electricity.

So what do we do about it? Gilbert suggested that we advocate for alternative energies, become aware of our habits and choose to change them. This brief presentation was only a small part of the discussion about energy usage on campus. There will be more meetings and events in the near future to help change our energy-consuming culture and habits.