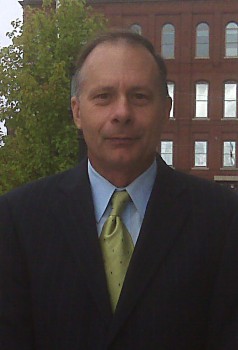 Carl Haarer, an accomplished radio personality, will be on campus this coming Monday and Tuesday to deliver a keynote address in the Umble Master Class. Photo contributed.

Carl Haarer, award-winning reporter and radio poet for WBZ in Boston, is this year’s featured Umble Master Class speaker. He will be on campus on Monday and Tuesday next week to speak in classes and deliver the keynote address. The keynote address, entitled “Breathe on me, breath of God” will be held in Umble Center on Tuesday, Nov. 17 at 7:30 p.m. The lecture is free to the public and will include a reception.

Haarer’s career began at Goshen College, where he received a Bachelor of Arts degree in English. He now goes by the professional name of Carl Stevens, and is a well-known radio personality in Boston. He was named “Best Radio Reporter” in Boston Magazine’s August 1997 issue. Through his general reporting work at WBZ he has won, four times, the prestigious Edward R. Murrow National Award for Writing, as well as  a National Murrow Award for Feature Reporting.

His on-air poetry concerns both political and current event material; a few examples include the Obama inauguration, the primary election campaign of Hilary Clinton and the baseball rivalry between the Boston Red Sox and New York Yankees.

Haarer will share his reporting experience and poetry with Goshen College students in several settings. He will speak in Broadcast Media Production and Introduction to Radio classes, in addition to two “Lunch and Learn” sessions where any students are welcome to engage in sharing and conversation with Haarer over the lunch hour. On Monday, Nov. 16 from 11:30 a.m. to 1 p.m., students can join Haarer in the Dining Hall to discuss and hear some of Haarer’s poetry. A similar session focused on broadcasting will be held in the Dining Hall on Tuesday from 12:15 p.m. to 1:30 p.m.