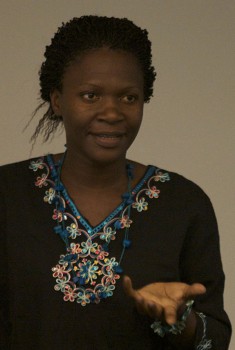 Sarah Kaweesa spoke on campus Monday about the physical and economic effects of climate change in her home country, Uganda. Photo by Angelica Lehman.

Sara Kaweesa, a creation care advocate from Uganda, spoke to students on climate change in the Communicating Across Cultures class on Monday evening. She is from the A Rocha Uganda Initiative, touring the midwest with Reverend Tafue Lusama, who is speaking about the effect climate change is having on his home country of Tuvalu. The two spoke last week at the Goshen Theater as part of their “Ankle Deep in Reality” tour through Indiana, Michigan and Ohio.

Of the effects of rising carbon dioxide emissions, Kaweesa said, “Forgive me, but Africa bears the brunt, but has not been the source.”

She began her presentation with a number of statistics about the current demographics in Uganda: 75 percent of Uganda’s population is below 25 years of age, and youth unemployment rate has reached 83 percent.

Kaweesa noted the absence of supermarkets and stores in Uganda, and consequently, the people’s reliance on goods the earth produces.

“I’ll go to my garden, I’ll get my food and herbs there,” she said. Environmental degradation affects the lives of poor people because they depend the most on natural resources.

According to Kaweesa, if the earth were to rise in temperature two degrees it would have a catastrophic affect. It would greatly reduce the useable land for robust coffee production, which is the leading export in Uganda. Increased temperature means increased crop failure, Kaweesa said.

“People have committed suicide, people that I knew,” said Kaweesa. “They couldn’t bear to watch their children die [of hunger].”

Kaweesa strongly urged that adaptation is possible, as well as increasing food security by taking measures to save energy. Women in her village have begun to hang plates to dry directly above a garden bed so that the water is reused—dripping off into the soil.

She elaborated on the spiritual roots of the ecological crisis.

“I see God’s power in creation,” she said. “If there’s any reason to care about the earth, it is for Christ.”

Kaweesa said that Christians should be at the forefront of environmental advocacy and action. Things we can do right now include: pray, intentionally serve overseas, spread the word about creation care to children and youth, and prune back our lifestyles. Despite cultural differences, she said we should focus on the similarities between nations.

“As Christians, we need to think pretty hard: where is it going to end?” said Kaweesa. She said there have been lots of different theologies that makes it hard for the church to be actively united for climate change.

“That’s why it has to be rooted in Christ,” she said. For more information on Restoring Eden, the organization both Kaweesa and Lusama work for, visit the website www.restoringeden.org.