Draft Resisters from ’69 to Reunite at PAX Conference 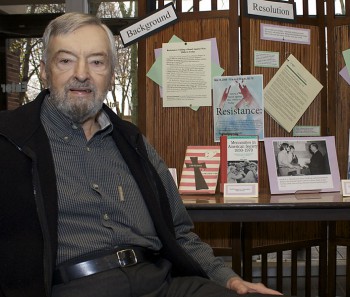 JR Burkholder, a student leader during the 1960s draft resistance movement, has more recently been working with GC's PAX club to organize a conference exploring the history of conscientious objection. Photo by Angelica Lehman.

Draft resisters from the 1960s will congregate at Goshen College this weekend to discuss resistance and peacemaking in Saturday’s PAX sponsored conference entitled ‘Resistance: taking a stand against war, 1960s to today.” Draft resisters who were student leaders at Goshen College in the late 1960s, along with resisters from other colleges, will reunite and engage in conversation with current student peacemakers in a weekend that is already drawing scholars from many states.

JR Burkholder, former professor of religion and peace studies, played a central role in draft resistance at GC in the late 1960s. He instigated conversation about holding a reunion this fall to commemorate the events of 1969, when the General Conference of the (old) Mennonite Church adopted a resolution stating that non-cooperation with the military draft was a legitimate stance for Mennonites.

“It all started when I sorted out papers from my past,” said Burkholder. “I was realizing how important the ’69 events were to that generation of students.”

Burkholder named Doug Baker, Devon Leu and Jon Lind as the student “ringleaders” of draft resistance at GC in the 1960s—all three will be on campus this Friday to speak in religion classes and share at the conference on Saturday.

The conference will take place in NC 19, beginning at 10 a.m., with stories and conversation with Baker, Leu, Lind and other 1960s draft resisters. PAX club members Daniel Foxvog, Hannah Miller and Annali Smucker, all seniors, will lead the session with some initial questions, after which the session will open up for questions from the audience.

“It’s important for us to learn from history how we can have an impact in society, and how we can communicate effectively with the church as college students,” said Foxvog.

After a complimentary lunch, three workshops will be offered on the themes of tax resistance, counter-recruitment and working with the military. Duane Shank, a draft resister who was arrested as a freshman at EMU during the ’69-’70 school year, will deliver closing remarks and summarize thoughts shared throughout the day.

“[The conference] is a two-pronged approach,” said Burkholder. “It’s a reunion and a conversation with today’s peacemakers.”

Perry Bush, history professor at Bluffton University and author of “Two Kingdoms, Two Loyalties” (currently on display at Good Library), contacted Michael Friesen, of the University of Toronto, about the conference. Friesen is focusing his Ph.D. work on Mennonite draft resistance during the Vietnam years, and he will attend the conference.

Those interested in attending the Resistance conference on Saturday should email Sylva Keenan at sylvark@goshen.edu. Those who would like the complimentary lunch must email Joe Leichty, at joecl@goshen.edu, by noon on Thursday.