On hazelnut, vanilla and mixed company 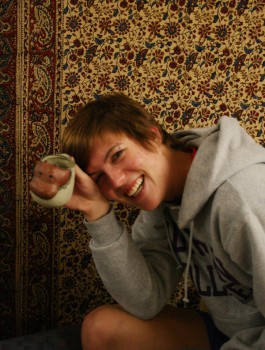 I don’t like French-vanilla flavored coffee.  Coffee, as in robust, fresh, dark or lightly roasted, with milk—or just black, depending on the day—and no sugar is wonderful; of that I’m positive.  As for French-vanilla coffee, I’m confused.  I love the “French” flavor—it’s actually hazelnut (I learned this as a barista)—and vanilla is wonderfully soothing.  For reasons beyond my control, I don’t like the two flavors together.  However, I make a point of getting my fill of hazelnuts–they’re a healthy snack, and lately I’ve also been enjoying vanilla yogurt.  So, if you don’t like something as a whole, break it up and enjoy it in parts.

Thirty-one years ago, in the Nov. 10, 1978 (vol 88, no. 9) issue of the Record, writer Judy Weaver wrote an article titled “Do GC students ever ‘go for it?’” Weaver was referring to the dating atmosphere on campus—or rather the lack of dating atmosphere—and she interviewed students for their perspectives.

In 1978, students at Goshen College were concerned that the first-year students were dressing up more and appeared trendier—they reasoned this was because those students wanted to be asked out on dates.  Sophomores, in the article, typically said they were embarrassed to visit their friends from the other gender during open house hours because it implied romantic interests.

Juniors and seniors in 1978 talked about the social mood on campus, saying it was “chummy” enough for them.  However, Weaver also wrote that they “spoke unabashedly of being choosy about their friends.”

Said a senior in 1978, “I feel more comfortable choosing friends now that I can see ‘types’ of people and know the type of people I want to have for friends.”

Thirty-one years later, not much has changed.

Clothing and styles are still important to Goshen College students.

People still avoid dating. I say, go on dates.  It helps the economy.  It’s fun.  You get to know yourself—as well as the other person.

But the comment about friend groups is tough.  Do we really have to choose our friends based on the “types” of people we want to hang out with? When I look at it in terms of coffee, the answer is yes.  French-vanilla flavored coffee is a type of coffee I know I don’t like.  However, I also know I like hazelnut and vanilla separately.

I also agree that the social atmosphere at Goshen College is “chummy.”  I think this is really great.  I just wish it wasn’t an all or nothing sort of affair.  We should make hybrids of our social groups (and of universal coffee flavors because I’m tired of French-vanilla).

I’m talking to all those who are feeling hazelnut—find another flavor to blend with in addition to your trusty vanilla.  Hazelnut and toffee, hazelnut and cinnamon…even hazelnut and chocolate.  Yum.

Same goes for the vanilla-minded people—find some other flavors as well.  Vanilla makes anything wonderful…it’s the secret addition to Allison Yoder’s pancakes, but don’t tell anyone.

I’ll end with one more thought.  Hilary Shirk, one of the eight other women I live with, has a coffee cup.  I like coffee cups.  I also like hippos, and these two things are related because she has a hippo-coffee cup—and the snout of the hippo actually protrudes out from the mug!  This is the perfect example of why it’s important to make hybrids out of our social groups at Goshen College: cool things might happen.