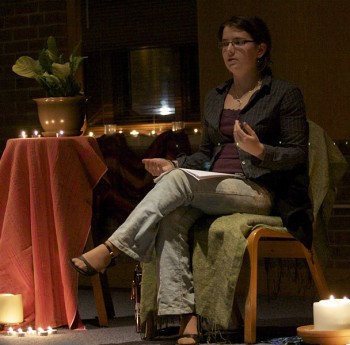 Alana Kenagy, junior, spoke about her experience with emotional abuse at Tuesday's Take Back the Night vigil. Photo by Angelica Lehman.

T-shirts fluttered in the breeze in Schrock Plaza this week, created by victims and friends of those who have suffered from sexual assault or domestic abuse. Goshen College recognized sexual assault and domestic abuse this week through the clothesline project, the annual Take Back the Night vigil, and a women-only safety awareness training.

Although taken down earlier than scheduled, the clothesline project drew people to Schrock Plaza to view the variety of T-shirts hung each year, giving artistic representation to those who have encountered sexual or domestic abuse or know someone who has been affected.

On Saturday, about 30 GC women gathered in the Rec-Fitness Center for safety awareness training–a huge increase in participation from last year. The training was led by members of Peacemakers, a martial arts team from Goshen. Steve Thomas, director of Peacemakers, and Wes Higginbotham, master instructor in martial arts, split the seminar into two parts: verbal assertiveness and hands on martial arts instruction.

Students were given a chance to ask questions about situations they face in GC settings as they learned about self confidence in dealing with verbal assertiveness. Then, they learned martial arts with instruction from Higginbotham.

“We learned how to get out of a choke-holds and arm grips,” said Hannah K. Miller, a senior.

On Tuesday night, students gathered in Newcomer Center for the annual Take Back the Night rally, a movement inspired in the 1970’s by a group of women who wanted to recognize the fear the night brings.

A chime rang every two minutes to symbolize that a woman is assaulted every two minutes in the United States. Piper Voge, a senior, and Alana Kenagy, a junior, shared their personal stories amidst candlelight and interspersed Taize music. Voge’s story dealt with physical abuse, while Alana’s dealt with emotional abuse.

Kenagy articulated the difference between the two types of abuse; while both are traumatic, emotional abuse is the kind you don’t see.

“You don’t hear stories in the news about them,” she said. Due to the intimacy of the vigil, story details will not be printed.

After the vigil, the men who attended worked on a painting project called “These Hands Don’t Hurt,” and the women bundled up for a march.

Chanting “Women Unite! Take Back the Night!” the women walked the path down eighth street to New York street, and back towards campus along ninth street. Houses along the streets were invited to turn their porch lights on or light candles in solidarity of the march.

Miller commented that helping plan the Take Back the Night rally this year gave her a new perspective.

“It was more empowering this year,” she said. “I could see other people experiencing [the vigil] for the first time.”