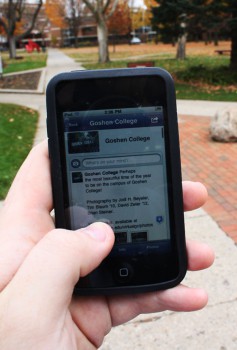 Facebook usage on campus, via portable devices or home computers, is almost a way of life. Photo by Tim Blaum.

Since Mark Zuckerburg and three friends began the thefacebook.com for Harvard University Feb. 1, 2004, this social networking site has grown into an international sensation.

Not even 6 six years old, Facebook has grown from an informational host to an eruption of games, contacts, quizzes, groups and more. With over 300 million users, Facebook is no longer just a hub for social college students. Facebook’s popularity, along with both some skeptical users and non-users, give the Web site a complex place in today’s world, even here at Goshen College.

As of last Wednesday, Nov. 4, 2009, 1,634 people were members of the Goshen College network, while Goshen College’s fan page lists 1,758 fans. The admissions office began hosting groups catered to incoming classes and those considering attending Goshen about two years ago. The public relations office manages the Goshen College fan page and sends out event invitations for performances, campus open houses and even convocations and worship services.

But before the college ever began using the Web site, students were posting photos, updating statuses and writing on walls.

According to an independent survey with voluntary responses, most of the Goshen College community on Facebook activated their accounts during high school or early in their college careers. Most people joined Facebook because they were curious, wanted to stay connected to family and friends, to network, or a combination of those reasons.

Interestingly enough, not everyone agrees with the idea of Facebook as a social networking site.

In an article by John Cassidy in the May 15, 2006 issue of “The New Yorker,” Columbia University Sociologist, Duncan Watts tells Cassidy that Facebook isn’t popular because of it’s networking possibilities at all.

“If I had to guess why sites like Facebook are so popular,” he told Cassidy, “I would say it doesn’t have anything to do with networking at all. It’s voyeurism and exhibitionism. People like to express themselves, and they are curious about other people.”

“You’re with your friends, but you’re also creating the possibility that you’ll bump into someone else, in which case you might meet them, or at least be noticed by them. So it’s not about networking (which is more instrumental), or even about dating (which is far more specific), so much as it is about mingling.”

This “mingling” is evident in some of communication that goes on. Facebook status updates are limited to 420 characters. Unlike sites like MySpace, Xanga or WordPress, there is no way to publish a journal or blog front and center on your page, only a status, and the first few lines of what others have written on your wall.

On the other hand, Facebook has moved in the direction of greater communication. It now utilizes a chat feature, an e-mail-like system and is accessed by over 65 million people

A Goshen College poll showed that many GC students spend substantial time on Facebook each day.

on their mobile devices.

Julie Reese, professor of psychology, agrees with the idea that, while Facebook can be a useful social tool, it can often be voyeuristic.

“For people, students, who use it to stay connected, it’s a good thing,” she said. But in other cases, it can be less about staying up to date and more about “gaining satisfaction in other people’s grievances.”

“While people may enjoy looking at pages of people who they’re not deeply connected with,” she said, “most pages people look up are close friends.”

Reese explained that seeing the often “mundane details” of a person’s day, through their status updates, for example, seems to create a “cyber sense of physical closeness.”

“Seeing what people are doing on a daily basis, from the mundane to the exciting, makes it feel more like you’ve been with that person.”

But that easy access to ever-changing information can impact people’s time and non-cyber relationships.

“Being able to get information so quickly,” she said, “whether about people or things, with just the click of a finger, distorts our concept of time, for one thing.”

Not only that, but Facebook enables our fast-paced society, so that “we don’t need to slow down, but just create new means to allow us to continue,” possibly at the consequence of relationships off the computer.

Reese said research has not yet shown what the consequences of this are, whether they might include “the breakdown of what it means to have private and public lives, etiquette of relating to people of a different status [or] realizing that relationships do take time.”

“You can’t just chat with your child [online] and only see them [in the physical world], but feel comforted because you are spending time… [Facebook] cannot replace some things, but it gives the illusion that it does.”

One respondent to the independent survey wrote that she had felt frustration from Facebook, similar to what Reese described.

“ I knew it made me less happy,” the person wrote, “but held onto it for a long time. I don’t need one more thing to check, i.e. phone messages, e-mails, mailbox, Moodle, etc. Also, I recognized that Facebook is a powerful force that dictates how many people spend many hours of their lives without giving joy. It also gives a false sense of connectedness… It eliminates the need to get together with friends and show them pictures face-to-face and tell stories and spend time together. It allows people to construct an image of who they want to be rather than who they are.”

A friend is a friend is a faculty problem
Many students, faculty and others in the Goshen College community, though, seem to be able to maintain a healthy amount of Facebook use in their lives, whether that means not getting an account or whatever the user decides.

Being in a smaller, often more trusting environment, though, brings its own problems, larger, more formal colleges may not encounter.

Generally, Goshen College faculty and students are more comfortable with one another. Students call professors by their first names. Some students, and even professors, go to class in bare feet. Now, with the advent of Facebook, many students and faculty members are cyber friends as well.

According to Tom Myers, discussion arose at a teaching-faculty meeting a few weeks ago about faculty-student relations in Facebook and on-line in general, after a student wrote profanity on a faculty members Facebook wall.

Myers said that there is currently no protocol for student-faculty online relationships, but that after more conversations there likely will be some guidelines. Several faculty members have personal principles for “friending”  students online. Myers, for example, only befriends students after they have graduated. Some faculty members limit their friendships on Facebook like Myers, while others have several student friends.

Facebook will likely pose ethical and personal issues for many people, but despite it’s controversy, people continue to applaud the cornucopia of social and informational outlets that make Facebook.