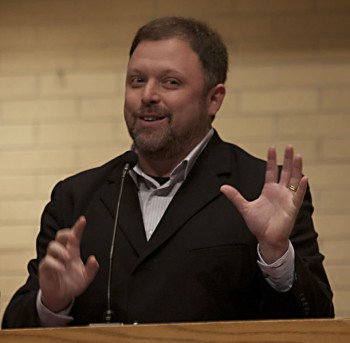 How are a 36-hour-old pot of rotting gumbo and white privilege alike? “It doesn’t matter who made the mess, you live with the residue and heritage of the mess now, and are responsible for the clean-up,” said Tim Wise, an anti-racism speaker and author whose most recent book is titled Between Barack and a Hard Place: Racism and White Denial in the Age of Obama.

This illustration opened Wednesday’s special convocation about white privilege, as part of Goshen College’s endeavor to increase awareness of racism and diversity.

Wise’s convocation focused on the root of racism: white supremacy and its effects, seen as white privilege. “This nation was founded on a formal system of white supremacy,” Wise said as he gave examples of white supremacy from his own family’s history, “but it is not only ancient history or past, it is present.”

Wise challenged the campus to realize that we live with the legacy of white supremacy. We cannot ignore the manifestations of racism that remain. Despite the individual successes of President Barack Obama or Oprah Winfrey, “Job applicants with white sounding names are 50% more likely to get called back,” Wise mentions, “and white people have 11 times the net worth of African-Americans and eight times that of Hispanics.”

Wise closed convocation by encouraging people not to feel guilty, but instead to take action. “Although we are powerless to stop [the legacy of white supremacy], we are not powerless to respond to it,” he said.

Wise will remain on campus for another day for workshops with education students, meetings with CITL, MAO, student leaders and professors, and will speak in the Race, Class, and Ethnic Relations class on Thursday night.