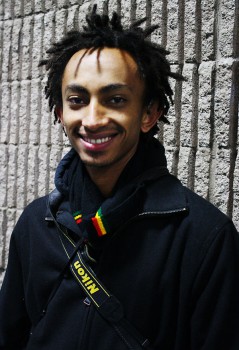 I started kindergarten at a Catholic school in Addis Ababa, Ethiopia, which is founded and run by Italian missionaries. For those of you who might not know where Ethiopia is, it is located in East Africa bordering Kenya, Somalia, Sudan and Eritrea.  I went there until grade 7, at which point I was expelled because I didn’t really agree with some of the beliefs and rituals that they forced upon students– for example, attending mass.

What made it hard for me was that I went to a protestant church called MKC on Sundays, which taught me a different religious perspective.  I grew up mostly with my grandfather, (Tsigie Derseh), who shared Ethiopian orthodox religion, and who is probably the most important person in my life. He passed away three years ago. He was a very devout man, but he never had a Western education or any education, really. He was a farmer and a soldier all his life, but he taught me one of the most important principles in life: to treat others as I want to be treated. On top of the collision of different religious ideas that I experienced, my home—the furniture, colors, wall decorations and cooking materials—look like an Islamic home, but we are Protestants living there.  We don’t follow the Islamic faith, but our lifestyle revolves around that culture because my family is from Harrar, a very strong Muslim city near the Somalian border.  I think that has played an important role in shaping what I think.  Being surrounded by a different Muslim culture and having Muslim friends in the school also showed me a little of what Islam is like.

To some extent when I came here to Goshen, it was a completely different cultural and religious scene.  It took me a while to get used to it. I didn’t really want to come here in the beginning.  One of the reasons I stayed was because of the people.  That doesn’t mean Goshen is a safe zone for everyone, though, and there are some things I can’t really change.  But there are some policies—such as chapel and convocation—I don’t find really agreeable.  I think they force too much of a certain religious perspective on a person.

I completely understand that Goshen College is a faith-based education center, but coming here and seeing a required religious chapel for people who don’t necessarily believe in that faith is something I disagree with.  Some might argue and say there are alternatives, such as writing a paper, but I think religion is personal. It should not be something we are required to reflect on, but it should stay personal.  People might be interested in how one approaches a certain religious view, but I think the requirement should be cut off.

Global Citizenship is sometimes misunderstood by the administration and students. I can’t go on SST.  I was told that coming to Goshen was my SST experience.  If you come from any part of the world that is not the US, they assume you already know some culture.  However, I have no idea how people live in Cambodia or Tanzania.  There is a preconceived idea that the United States of America is the center of the world and anything outside of that is just “foreign” and all the same. In reality this is not true, and Ethiopia and Cambodia are by no means alike. I feel like I’m being denied a class because I’m not part of a certain group. When I look at the SST that other students get to experience, I see organized groups that are briefed and instructed and walked through their experiences as a team.

If some say this is my SST, why is no one caring about how I’m doing after my three-day orientation?  Sure, we have some pizza and refreshments sometimes, but they should put us in groups to help us break down and understand the culture at Goshen just like students do on SST.

Despite these shortcomings, I appreciate being at Goshen. I enjoy the company of my good friends and what I have learned, both in and out of the classroom. I really want to thank everyone: faculty, staff and especially my friends for the unconditional love, comfort and support.