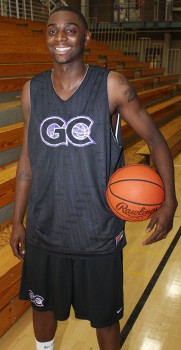 Daniel Butler, GC's 24 year old basketball recruit, is expected to be an asset to the team this year. He was offered a full ride to play for GC. Photo by Tim Blaum.

When six-foot six-inch basketball player Daniel Butler graduated from Milwaukee Tech Community College in 2006, he never expected to play basketball as part of a team again. As it turns out, Butler’s career on the court did not end there.

Though he was born in Kalamazoo, Michigan, Butler was raised in Milwaukee, Wisconsin, and he calls it home. When he was little, his dad taught him to play basketball, but it was nothing more than a backyard hobby until Butler joined his first team as a sophomore at Milwaukee Custer High School. He finished out with a very successful high school basketball career, averaging 18 points a game during his senior season and being selected Honorable Mention All-State.

Post-graduation, Butler went to Milwaukee Tech Community College, where he took general education classes and captained the basketball team. During his final season, he was team MVP, all-conference and All-State Region 4.

“Some people wanted to outshine others, but overall we had decent chemistry,” Butler said of his Milwaukee Tech team. “We were a lot of fun to watch; students liked to come out to games.”

Following graduation from the two-year college, Butler spent some time working as a banquet cook at a hotel and as a lifeguard. Eventually, after three years of working to support himself, Butler began to consider going back to school.

“I think I grew up a little bit somewhere in there,” said Butler. “I didn’t want to be the one who waited too long to go back to school.”

Butler had never even heard of Goshen College until his cousin Kyle Davis, a first-year, was recruited to play basketball. “Kyle and another friend used to invite me to come along to open gyms at GC,” said Butler. “One morning they were like, ‘Hey, want to come to Indiana real quick?’ They needed some more guys to play.”

Men’s Basketball Coach Gary Chupp was impressed by Butler’s performance on the court, and he added him to his recruiting list just days before classes began for the fall semester.

And that’s how it came to be that Butler, at age 24, found himself registering for classes at Goshen College.

It’s taking some time for Butler to adjust to school again. Living off campus at the home of Kelli King, Coordinator of Alumni, Church, and Parent Relations for the college, allows Butler a relaxing and private retreat from the busyness of college life.

A desire to help people has led Butler to pursue a degree in Social Work. “My experiences in life have made me want to help and support kids,” Butler said of the motivation that fuels his career plans.

As for basketball, Butler is excited about the team. “It’s a really down-to-earth, humble group of guys,” he said. “And we have a good coach. Chupp knows what he’s talking about and works hard. I think we’re going to have a successful season as a team.”

For Butler, it’s just good to be back.