Trio of student essays selected to air on WVPE 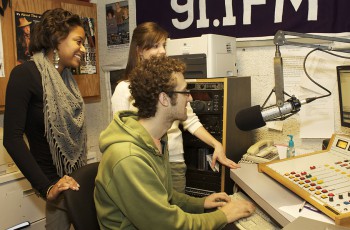 From left: Brett Bridges, Kelsey Shue and Chase Snyder's This I Believe essays were selected to be aired on 88.1 WVPE, the local NPR affiliate. Photo by Angelica Lehman.

Three students from the Writing for Media class have had their essays selected to be on air on 88.1 WVPE. Brett Bridges, a junior,  Chase Snyder, a senior, and Kelsey Shue, a junior, each articulated a conviction of their own through an essay entitled “This I Believe,” which will be aired later in November.

Every year,  Duane Stoltzfus, professor of communications,  assigns students in his Writing for Media class the essay fashioned after a National Public Radio (NPR) program entitled, “This I Believe.” He then sends these essays to WVPE, the NPR affiliate station for the Michiana area.

Lee Burdorf, the program director of WVPE,  chooses three of the essays to be read on air by the student writers.

Snyder’s essay is about truly listening to others and not judging a person who is different from you based on his or her beliefs or history. His belief in “deeply listening” comes from the friendship between his father and “Black Powder Bob,” a vastly different person from his father.

Shue wrote about growing to love her high school “clunker car” and how it taught her about character. Bridges’ essay is about how working through a busy school schedule helps you grow as a person.

After four years on the air, NPR’s ‘This I Believe’ program ended in April 2009. The program invited people both young and old across the world to share their personal beliefs in essay form through regular broadcasts in the United States. Jay Allison, host of the series, explains ‘This I Believe’ in an NPR press release as a “philosophical self-examination in a public context.”

Everyone from Yo-Yo Ma and Bill Gates to 12-year-old Macklin Levine has read essays on air.  Although the NPR program is no longer broadcasted, the executive producer is continuing to accept essays from around the world. This I Believe, Inc. plans to compile books of the essays and continue working with smaller NPR member stations such as WVPE.

Look for the winning essays to be broadcast in November on 88.1 WVPE.