Yoders to run a marathon in Marathon, Greece 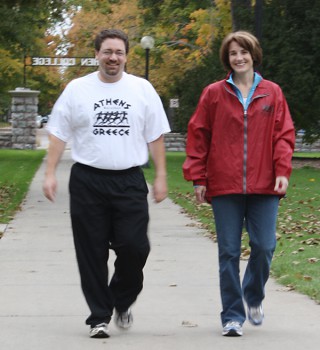 Bob and Pamela Yoder will run their second full length marathon in November, and this one's in Marathon, Greece, the city for which the race is named. Photo by Tim Blaum.

A year ago, Campus Pastor Bob Yoder would never have imagined himself running the route of the original marathon through the hills of Greece. But in November, Yoder and his wife, Pamela, will do just that. This will be Yoder’s second full marathon, having participated in the Bayshore race in Traverse, Michigan this past May.

The idea for the run came about as an accident. Pamela, pastor at First Mennonite Church in Middlebury, is taking a sabbatical leave from her pastoral work this fall. As part of her plans for the break, Pamela decided to focus on three “R’s:” reconnecting, relaxing, and running. One night, while reading Runner’s World Magazine, Bob came across an advertisement for a marathon that follows the original 26-mile route from Marathon to Athens. Jokingly, he suggested it to his wife.

“Pamela obviously took me seriously, because she wrote the idea into her grant application,” Bob said, referring to Pamela’s application for a grant from the Lilly Foundation to support her sabbatical goals. Following the run, the pastor duo will continue to travel around areas of Greece, exploring the Biblical sites of the apostle Paul.

Bob Yoder has not always been a runner. Though his wife has been running since high school, Bob decided to give it a try about a year ago. “I started off doing 5Ks here and there, like the one at the Relief Sale and others locally,” he said. “Then last fall I did my first half marathon.”

Yoder began to run as a way to cope with various stress factors in life. After he ran the half marathon last October, he realized how much he enjoyed the running community. Yoder decided that the next thing on his agenda would be running a full marathon. Yoder is now training for his second 26-miler.

“After the Bayshore Marathon in May, I pretty much took the month of June off,” he said. “But since then, I’ve been doing a long run every other weekend and several three to four-milers during the week. It takes training and preparation, but running has also become a prayer discipline for me.”

Bob is hoping that the route in Greece will be a little more interesting than the courses that he’s used to. “The last six miles will be in the city of Athens, which is obviously very different than the lonely country roads I’ve been running around here. I’m excited; this has been a part of my life for the last year, and it’s been a good thing.”