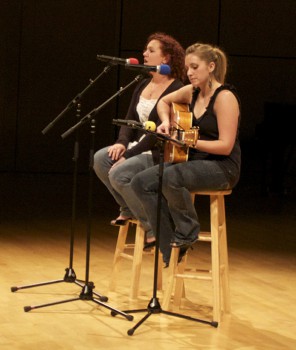 Hannah Groff (left) and Lauren Eash sang an acoustic cover of Call it Off, by Tegan and Sara, at Kickoff this past Friday. Photo by David Zwier.

Kick-off has come and gone once again, but it will not soon be forgotten.  The student body showed raucous enthusiasm during every part of the evening, from the winning acts to the music that played during stage changes. Here are a few of the many memorable acts from Fall Kick-off 2009.

The evening began with a brief tribute to Happy Camper and the Bees, a group of recent graduates whose songs were Kick-off hits last year. This led into their zany and catchy music video “Baby Come Back to Me,” produced by Jacob Landis-Eigsti, a sophomore. There were several other music videos, including freshman Marshal Watson’s surreal camera shots and a superhuman acrobat set to “Oslo in the Summertime,” by Of Montreal.

David Harnish and James Green, two students on SST, were not able to be in Goshen for Kick-off. However, that didn’t stop them from showing off their lyrical prowess, which was filmed on location at Machu Picchu, Peru. This proved to be only one of many original rap songs performed by students.

The dances of the evening came from a multitude of styles. One of the most spectacular was a number by Salsa Verde, Goshen College’s salsa team. This group performed intricately coordinated moves as a group, but also separated into couples to show off their spicy technique.

One thing that the winning acts of the night shared in common was their emotional connection with the crowd. Nathaniel Tann, a sophomore, wrote and sang a powerful song to achieve second place while third place winner, Daniela Zehr, a senior, danced and effortlessly played the heartstrings of the audience while showing off her athleticism.

In the end, amongst the T-shirt hungry frenzy waiting in the Music Center lobby, the first place winner was announced. The victors earned their standing ovation after their passionate rendition of “Kids” by MGMT. The troupe of singers, dancers, and musicians, calling themselves the Witches and Wizards of Goshen College, captured the spirit of the event with one artful, yearning and downright groovy song.