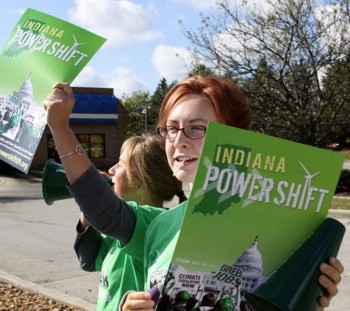 After a long day of workshops and rallies, the GC students who attened Powershift, a conference on climate and energy policies, returned to campus inspired to make change here in Goshen. Photo contributed.

Eleven students traveled to Carmel, Ind. last Saturday to attend Powershift, a summit propelled by young people who are demanding action on climate and energy policies in 2009.

The group spent all day Saturday at the event attending workshops and listening to speakers. Hannah Eberly, Corinne Jager, Luke Zehr, all first-years, and Alana Kenagy, a third-year, stayed for the evening symposium entitled “Awakening the Dream.”

Roughly 100 people attended Powershift, and they started the day with a speaker who explained the science of climate change. A small rally was held afterwards.

“We all had signs with things like ‘Green jobs for Indiana’ on them and marched into the streets and blocked traffic for a bit,” said Emily Kauffman,  a third-year who attended.

After lunch, Goshen College attendees split up to attend various workshops throughout the day. Workshop titles included Ecology and Faith, Getting Beyond Coal and Future Housing for Spaceship Earth.

Alana Kenagy, a junior who attended, said the workshop entitled “Deep Listening for Community Organizing” was her favorite. The speaker, De-Amon Harges of Broadway Church, is the only “roving listener” in the country.

“He goes around in a certain community, finds out what people like, gets to know them, and then makes connections with other people,” said Kenagy. “He tries to build a better community through that.”

A few examples of Harges’ work in his Indianapolis community are inviting all the artists over for dinner and helping the 75 individual garden owners connect with each other to eventually form a community garden.

Kauffman attended a workshop titled “Tar Sands: Dirty Oil and Our Clean Energy Future,” which focused on the practice of extracting oil from tar sand beds. She explained that the process is detrimental in many ways; one such negative effect is that large areas of habitat are destroyed in order to get at the oil.

“There is a large amount of waste water produced from this process which is put in these huge toxic lakes,” said Kauffman. “Any leaks in the toxic lakes could be catastrophic for everyone around, especially if it gets into the local rivers which provide water for lots of people.”

After workshop sessions, participants attended a session on climate legislation.

“We all got to program our senator’s phone numbers into our phones and call them,” said Kenagy.

The Goshen College attendees cooked dinner together on a camp stove that night before one car load drove home and the remaining four students stayed for the “Awakening the Dream” symposium. Through video, discussion and meditation they explored issues such as social and environmental justice, sustainability and the larger sense of fulfillment in a comfortable setting.

“Luke Zehr and I got inspired to do an ‘Awakening the Dream’ symposium on campus next semester,” said Kenagy.

Overall, the group had a positive experience and came back inspired to bring these issues to campus in a new way.

“It was fun to be around such passionate people who are working together towards a common goal,” said Kauffman. “It made me realize that it really is up to us to get things moving.”