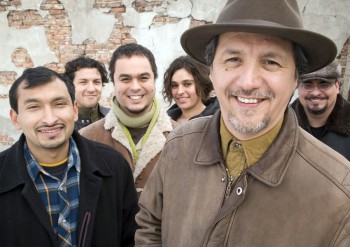 Balet Folklórico and the award-winning Mexican folk band Sones de México will perform at 8 p.m. in Sauder Concert Hall on Friday, Oct. 23. Tickets are free with the donation of a canned item to The Window, a food pantry located on Main Street in Goshen.

The concert is sponsored by Goshen College’s Center for Intercultural Teaching and Learning (CITL) and by the Performing Arts Series.

Concertgoers are encouraged to drop off their cans at the Performing Arts Center that evening. Ed Swartley, executive director of The Window, will be present with information about the food pantry’s services.

CITL wanted to give everyone the opportunity to attend the concert, not only those who could afford it. In doing so, the idea for the food item-ticket exchange was born.

“What better way to serve the community than to provide support for locals?” said Rebecca Hernandez, director of the intercultural center, explaining the reason for the alternative ticket payment.

Last year, 700 people attended the concert by Sones de México, which was also sponsored by the intercultural center. This year, the music group returns and is accompanied by Balet Folklórico, a dance troupe. CITL is hoping to pack out the music hall with 1,000 people, not only from Goshen College, but from the surrounding area as well.

With 14 percent of Elkhart residents of Hispanic background, this concert is “a gift to the larger, diverse community,” with a specific emphasis on Spanish speakers and Performing Arts Series supporters, explains Hernandez. She hopes that the concert will draw a diverse crowd to the campus, some of them for the first time.

Funded by the Lily Endowment Program, CITL aims to make higher education accessible for more Latino students at Goshen College, to generate a diverse learning community and to research the changing ethnicity in the Midwest.

For years, Goshen College and The Window have partnered together. The Window has accepted Goshen College student interns, Celebrate Service Day workers have volunteered their time, and resident assistants have donated items from their halls. The Window offers a variety of services to the community, a few of which include Meals on Wheels and Katie’s Kitchen, a food pantry.

Swartley said that applications from volunteers who want to contribute are always welcome at the organization’s office at 223 S. Main St. “If you want to volunteer,” he said, “we’ll find a place for you!”