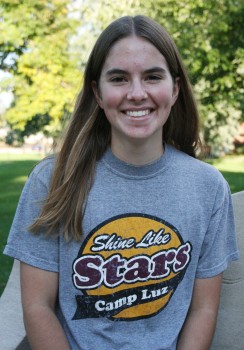 As a PJCS minor taking Mediation, I had the opportunity last Friday to observe Carolyn Schrock-Shenk , my professor for that class, on the job. Carolyn is working with the staff of Chandler Elementary School , which is part of the Goshen Public School System, and is located on 8 th Street . When Carolyn asked my Mediation class if anyone wanted to observe her work, I immediately responded. Not only am I interested in the practice of mediation, but Chandler is where I went to kindergarten and first grade. I have wonderful memories of my time spent there.

Chandler is considered by the state of Indiana to be a failing school. I don’t even begin to understand No Child Left Behind, but basically schools are supposed to make Adequate Yearly Progress (AYP), based on standardized test scores. In Indiana , AYP is based on the ISTEP-plus test results. Each year a certain percentage of kids are supposed to pass the ISTEPs, and that percentage is supposed to keep going up. Chandler is a Title 1 school, which means they receives extra money from the federal government to fund some special programs and positions, like a few interventionists. Because Chandler receives this extra money, they are held accountable to certain consequences for not achieving AYP.

Chandler has not met AYP for five years, which means they have to go through some form of restructuring, which could include a new principal, new teaching staff, or outside management. Carolyn was asked by Chandler principal, Lisa Lederach , to work with the staff as they continue teaching their students in the midst of incredible uncertainty about the future. In this situation, Carolyn wasn’t doing “standard” mediation work in the sense that there were two conflicting parties and she was helping them find agreement. She was there to help them figure out how they wanted to respond to being labeled failing, and how they would work through it together.

Chandler certainly isn’t failing because of lack of effort from their teachers. I met all of the teachers on Friday, and I didn’t find a single one that wasn’t passionate about the kids they were working with, and how to best teach them. Chandler is a wonderful and innovative school. As far as I understand, the main reason for Chandler not meeting AYP is the student population. Many of the students there are transient, moving frequently between schools without a lot of stability in their lives, and therefore in their education. Also, English as a New Language (ENL) students used to have to be in the school system for two years before being subject to the ISTEP standards, but now they are all tested, no matter how much English they know.

So for me, it comes down to this: I believe what’s going on is wrong. I believe judging a school by a standardized test is wrong. I believe labeling a school as wonderfully caring and dedicated as Chandler “failing” is wrong. I believe that any system that might leave a child thinking that she or he failed and caused their school to fail is utterly and incredibly wrong. So what will we do? What will we as Goshen College students and staff do? Peace and Justice students and faculty, can we challenge a system that favors white, middle class schools? Education majors, can we do something for these kids to help them realize what true success is get beyond the label of failing? Activists of all kinds, can we stand up and do something to support our community?

I’m only in the beginning process of thinking about what to do. I intend to talk to some staff at Chandler in near future about what can be done. One of the things they talked about on Friday was some kind of Goshen College involvement, but it remains to be seen what kind of form that will take. So remain on alert for things to come.

Contact me at sarahgr@goshen.edu if you want to help with anything. Let’s see what we can do.
Sarah Rody is a sophomore at Goshen College.