A Day at Dutch Wonderland 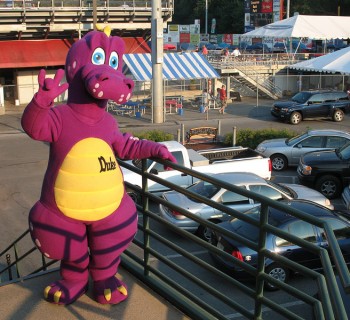 I believe that every child should visit an amusement park.

I’m not talking about a week-long trip to Disney World or Cedar Point, but rather a fun-filled afternoon at an amusement park designed specifically for kids.

While growing up, I lived smack dab in the middle of Lancaster Country’s Amish Country. Nestled within the never-ending fields of corn and hay is Dutch Wonderland, one such amusement park. As a youngster, I still remember pulling up to the castle, walking over the moat, and heading into the park to explore the wonders of another world.

Now, here I am, about to graduate from college with a degree in communication and theater, and I still remember my first trip as an eight-year-old to Dutch Wonderland. While there, I had an encounter with a purple dragon named Duke. Sure, I’d seen Barney on PBS, but standing in front of me was a moving, breathing, purple dragon with a yellow stomach.  While Duke didn’t speak with me that day, he did give me a high five and seemed to understand everything I was telling him.

Years later, while reflecting on the time I met Duke, it struck me that I was of legal age to be  employed. I pleaded with my parents to take me to Dutch Wonderland so I could apply for a summer job, and they agreed. Before we left, my mother gave me two pieces of advice: First, don’t work in the environmental services department if you can’t keep your room clean, and second, don’t be the dragon–it’ll be hot and smelly during the summer.

Within an hour of showing up at the job fair, I had been hired for the 2003 summer season as nothing other than Duke the Dragon. My first day as Duke was just like my mother had warned: hot and smelly. Over time, neither the heat nor the smell seemed to bother me as much as it did that first day.

Over the past seven years, I have spent my time perfecting my skills as Duke. While I’m not allowed to talk inside the costume, I have been able to communicate with the guests through hand gestures, body language, and how I walk.

My best memories come from the dog days of  summer, when only the bravest parents bring their children out into the heat. These slow days gave me the opportunity to give back to our guests what one Duke once gave to me: one-on-one undivided attention.

I fully realize that once I graduate from college, I will have to give up my childish dreams of being a purple dragon and settle down into a more normal life. Once this happens and I have my own children, I’ll be returning to Dutch Wonderland on one of the dog days of summer so that my own children can have the same experience with Duke that I had.