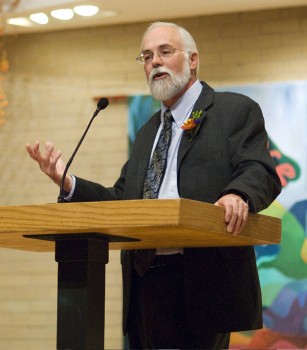 John Martin, a recipient of the 2009 Culture for Service Award, shared words of wisdom from his two years at Goshen last Friday in chapel during Homecoming weekend.

The Culture for Service Award recognizes alumni whose lives exemplify the college’s previous motto.  The award seeks to affirm those who have served the college, community, church, and world, or whose professional and personal achievements are models of the motto.

After Martin left Goshen 37 years ago as a self-proclaimed “dropout with a low GPA,” he went on to complete his B.A. degree in special education at Illinois State University and earned a master’s degree in community psychology at Temple University.

Throughout his career he has been active in helping the disabled, serving as a special education teacher, and acting as director of Sunshine Inc., an Ohio Mennonite agency serving individuals with disabilities. Also, in 2007 he was appointed to the cabinet-level position of Director of the Ohio Department of Developmental Disabilities.

Among other things he shared in chapel, Martin discussed the importance of leadership.

Martin said he discovered four things that help leaders shine a light around themselves—all of which were about building trust.  According to Martin, the first quality a good leader should have is competency.  Once a person has knowledge in a certain area, people will learn to trust his or her judgments.

The second feature of a good leader is the ability to tell the truth, despite how much easier it may be not to.

Martin used his experience of having to cut employees as an example for the third quality—being just.  When deciding which employees to let go, Martin really needed to recognize the impact his decisions made on everyone.

The final quality is to have accountability.

“A leader should never make a decision in isolation,” said Martin, noting that accountability should be a lifestyle.

“Leaders have an incredible ability to cast their spirit on others,” said Martin.  “This will either be a shadow or a light.”

The other recipient of the Culture for Service Award is Galen D. Miller, class of ’74.