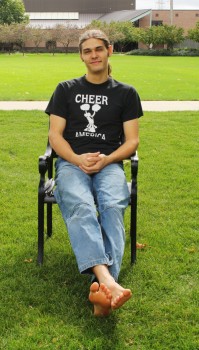 I’d like to consider myself a nice guy.  That isn’t to say I’m a radical do-gooder, but I’ve racked up a few karma points in my time.  Regardless of how good of a person I attempt to be, however, I always seem to end up in some of the same parts on stage.  In real life, I smile and make bread, take walks and give hugs.  On stage, I have ruled hell (several times), attempted to destroy friendships, repeatedly insulted and accosted anyone different from me, chopped off the head of my son-in-law, called a hit on someone, killed my friend, as well as a score of other terrible things that I’ve apparently repressed from my memory.

I don’t see this ironic moral dualism as a problem, technically, but it does have its disadvantages.  For example, if someone sees me onstage being terrible, as plenty of people have, and they haven’t actually met me, as plenty of people haven’t, there is an inextricable experience left in their mind of me being unlike I actually am.  That isn’t to say that the audience ever actually logically comes to the conclusion that I, the actor, condone the actions I perform onstage.  However, I believe that my first impression has been ruined for countless people I don’t know because they saw me onstage.

This isn’t me bemoaning my bad fortune.  I love theatre, and, let’s face it, it’s fun to be evil sometimes.  Perhaps what has contributed to my terribly optimistic nature is that I get all evil compulsions out on stage so I don’t need to be mean in real life.

I am fine with playing mean-spirited characters onstage for the simple fact that conflict makes art so much deeper.  If it wasn’t for conflict, there would be no need for artistic expression at all.  This simple tool, conflict, is what makes dramas dramatic, comedies comedic, tragedies tragic, horrors horrifying, and action action-ified.  The reason Lord of the Rings is such a great story is that Sauron is generally a mean-spirited person.  His creation of a ring of power is the basis on which the entire story is written.  If Sauron had instead decided to make a ring of cooking delicious fruit cake, the movie would have been way less epic.  While audiences may hate the antagonist (usually for good reason), if it wasn’t for her or him, the protagonist would likely sit around picking flowers and generally be a very boring person.  A nice life to live no doubt, but it makes for dry art.

So if having long hair, a furrowed brow and an obnoxiously loud voice is a mold from which terrible people can be made, I will gladly offer myself to the cause.  In my opinion, art is great, but art that makes you cringe is awesome.

Phil Stoesz is a junior Theatre Major and Creative Writing Minor from Goshen.