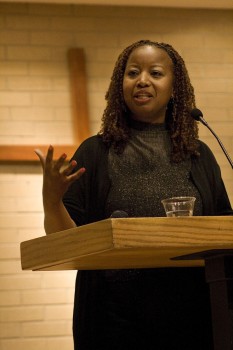 According to Brenda Salter McNeil, author and leader in the field of racial, ethnic and gender reconciliation, people are looking to hire a certain type of college graduate; the kind that can work in a changing demographic effectively and have tangible experiences that have helped them become culturally competent.

In Monday’s chapel, Salter McNeil outlined the process for the cultural audit that took place on campus this week. A cultural audit takes a critical look at an institution in regards to racial diversity and outlines ways to move forward; in effect, producing culturally competent individuals.

“In the context of Christian higher education, how do we benchmark our progress [in reconciliation]?” Salter McNeil said. “We help your institution evaluate itself.”

In terms of diversity and inter-cultural competency, she said a cultural audit could answer the questions: “Where are we, and where would we like to go”

Salter McNeil is president and founder of the company Salter McNeil & Associates (SMA), whose mission is to produce inter-culturally competent leaders and communities on college campuses and churches across the world. SMA conducted the cultural audit at GC this week.

According to Salter McNeil, initial qualitative and quantitative research is necessary through formal questions and interviews, focus groups, and assessment of campus life and the neighboring community.

The second step is what she calls “appreciative inquiry approach,” or looking for what is working well. This involves analyzing data such as GC’s website and admissions material.

“We use active action research approach, which is looking for information that can help us help you develop a strategic plan to move you to action,” explained Salter McNeil.

After analyzing and collecting data, GC’s diversity committee and SMA will  join forces to develop a strategic plan, which is presented in a feedback session. “The feedback session is vital to the process,” Salter McNeil said, “because it’s the institution itself providing recommendations instead of the outsiders giving instructions.”

After the feedback session, findings and recommendations are put together in a book that can serve as an institutional guide for the next four to five years.

This week on campus, SMA conducted many interviews and focus groups, and the organization interacted with students, faculty, and administration in order to instigate the audit.

According to Odelet Nance, director of multicultural affairs, GC’s feedback session will happen sometime next February and a final report date is expected in March 2010.

“On many college campuses there are pockets of good things happening,” Salter McNeil said. “We can help figure out how to coordinate things, moving toward a tipping point where energy is actually producing change.”