Welcome to the future, GC 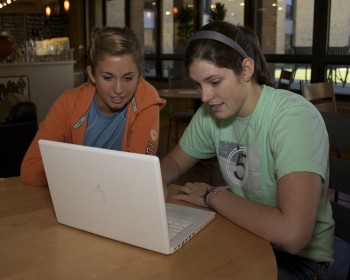 While increased WiFi coverage and a switch to Zimbra are some of the more obvious technological advances on campus, ITS has also begun using the e2campus system and increased bandwidth by connecting to the I-Light network. Photo by Angelica Lehman.

This article was reported by Lisa Perkins.

The future is now, and Goshen College is embracing the technological innovations that the 21st century has to offer, propelled by its Information Technology Services (ITS) staff.

Some of the new developments this year are widely known – the switch to Zimbra and the extended WiFi coverage around campus – but there are a few improvements that have gone almost unnoticed – the e2campus system, the bandwidth upgrade to iLight, and Zimbra’s many special features, to name a few.

“In the grand scheme of things, we’re trying to make the campus more friendly for mobile computing,” said Michael Sherer, director of ITS. Sherer has been the director of and driving force behind the ITS department for 12 years and it doesn’t look like he’ll be taking his foot off the pedal of technological advances this year.

With  Zimbra, Goshen’s new email account, email isn’t just email anymore; it’s a calendar, a schedule, an appointment-reminder, an assignment notebook, collaboration groups, and a storage bin for the papers that you need to keep but don’t want to clutter up your precious hard drive space. Zimbra also has numerous display themes ranging from “Lemongrass” to “Hot Rod.”

WiFi has been in the academic buildings for years now, but it’s a relatively new feature in the residential buildings. Last year, the apartments were freed from the bondage of ethernet cables. This year, that modern necessity was also brought to the Kratz-Miller-Yoder dorms. David King, a GC graduate, and David Hodges of the ITS department are collaborating on this project.

“Not only will you see wireless in all the dorms,” Sherer said, “Coffman and Kulp will come as soon as we can pull wire.”

The shift to WiFi would have been difficult, if not impossible, without another modification – more bandwidth. GC was operating with the DS3 last year, which supported a total of 45 MB. “That was enough,” said Sherer. But it wouldn’t have supported the increased usage due to WiFi in KMY, more devices using the system, and a greater use of video.

This year, there are close to 500 users on the wireless network and about three times last year’s capacity is consistently being used. The new iLight system has a capacity of 1 GB for Internet 2 and iLight traffic and 60 MB for commodity internet that “removes all barriers” and ensures that the network won’t collapse.

The network might not collapse, but if one of the classroom building or dorms does, everyone will sure to be informed right away. The new e2campus alert system sends alert messages via desktop clients, SMS, and email. Information on how to receive alerts on your phone and personal computer can be found at: www.goshen.edu/emergency .

There are still pending plans to increase classroom technology, update to Zimbra 6 over midterm break (unlocking more applications such as Google documents), and experiment to find out what other technology to move forward with and what to keep as is.