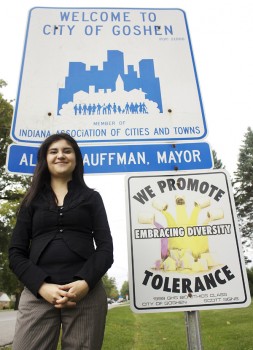 Anayeli Juarez will lead the first domestic SST next May Term. The program is designed to help students learn about Northern Indiana's Latino population. Photo by Angelica Lehman.

The planning for the new domestic S.S.T. is well underway. Anayeli Juarez, the recently hired program director for the Latino Studies S.S.T., has begun to schedule trips and service assignments within the Latino community of Northern Indiana.

Five students are presently enrolled in the Latino Studies S.S.T.

“At first I was worried and disappointed that not many students had signed up,” Juarez said.  “However, I realize that it is typical for a new program and we’re ready to start!”

This domestic S.S.T. is designed for students who cannot go on international S.S.T.  Therefore, scheduling the program has been a problem because the majors that are common for non-traditional students—nursing, education, and physical education—have certain classes that are only offered in the spring.   Another challenge for the domestic S.S.T. is that any juniors and seniors that would qualify have already taken their S.S.T. alternative credits and don’t need to participate in more S.S.T. courses.

To overcome these obstacles, heavy advertising is in the works for the domestic S.S.T.

Juarez and Tom Meyers, director of International Education, are working hard to create a program that feels much like an international S.S.T. feels.  The major difference between the two programs is that students will not live with host families in this region (although they will receive a host family to serve as a guide to the local Latino culture).

“This is not supposed to discourage students from doing an international S.S.T or take over the other S.S.T. programs, but is for those who can’t experience the traditional S.S.T.,” Juarez said. “The current alternatives do not offer service learning experiences or interacting with individuals from a different culture in a structured way.”

In contrast to spending six weeks on academic studies and six weeks on service assignments on international S.S.T., students enrolled in domestic S.S.T. will be doing service throughout the whole term.  The plans have not yet been finalized, but Juarez anticipates having students work with programs such as Bienvenido, which is run by the Northeastern Center, a mental and behavioral health center with six locations in northern Indiana. The Bienvenido program works with recent immigrants to help them adjust to the culture in the States.

Other possibilities for service locations include La Casa, an organization that provides housing and immigration assistance; the Hispanic Latino Health Coalition of Elkhart County; and La Casa de Amistad, a youth center in South Bend.

Field trips are also planned for this S.S.T., just as they are in international locations.  Tentative plans include participation with the Chicago Center for Urban Life and Culture, a center that puts together programming for students to experience urban life.  Participants would be able to do an immersion experience to learn about the diversity of the Latino community and the issues facing Latinos living in a city.

There may also be an opportunity go to visit the Farm Labor Organizing Committee (FLOC) in Toledo, Ohio, to learn more about advocating for issues related to the migrant worker community.  Juarez would also like the students to go to the Peace House in Indianapolis to learn more about the urban Latino situation in Indiana.

The goal of this S.S.T is to expose students to as much of the diverse Latino community in the Midwest as possible.  “The overall goal of the program is to immerse students in the Latino culture and that they become aware of the inequality in the United States society,” said Juarez.