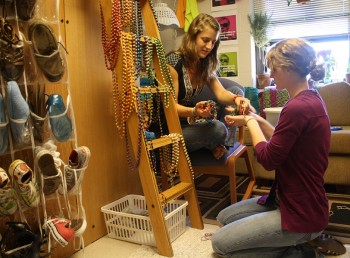 Grasse (left) shows off paper-bead necklaces, handmade by Ugandan women, to a potential buyer. Proceeds will be sent to the organization BeadforLife and used for community development, health access, and housing in Uganda. Photo by Molly Kraybill.

First-years Erica Grasse and Corinne Jager are changing the world, bead by bead.

Working with an organization called BeadforLife, the two have ordered over 350 strings of necklaces and bracelets, each consisting of paper beads handmade by Ugandan women. The profits made by selling the jewelry on campus will go directly back to the program, raising money for community development, health access, and housing in Uganda.

The plan developed this summer at Mennonite Church USA’s Convention in Ohio, where a stand offered youth string bracelets made of BeadforLife beads. Grasse and Jager, who both attend Blooming Glen Mennonite Church in Pennsylvania, were fascinated by the idea. Realizing the potential a college campus could offer to the project, the Goshen-bound friends made plans to order the beads.

“We were like, hey! Let’s do it!” said Grasse, who still wears her original BeadforLife bead on her wrist.

Grasse completed the order within the first week of school, and by Monday, September 14th the beads had arrived at the post office; a 13-pound package loaded with brightly-colored necklaces, bracelets, and loose beads.

Each bead is individually cut and rolled from recycled paper and then secured with glue. As a result, the beads are one of a kind; and, when strung together as a bracelet or necklace, form an original and beautiful piece of art.

BeadforLife was born of a random encounter in April 2004 when co-founders Torkin Wakefield and Ginny Jordan walked through a Ugandan slum and discovered a woman creating beads from paper. After talking to her, the two discovered that other community members had made hundreds of similar beads, but they could make no profit because there was no existing market. Feeling inspired, the two women left wearing the beads, and they told anyone they could about the origin of the beads. A week later, a third co-founder Devin Hibbard returned to the slum and bought several hundred necklaces to sell back in North America.

Since then the organization has grown into an all-volunteer effort, driven by the goal of supporting 300 beaders whose earnings support over 3,000 people. For every $10 worth of beads purchased, $7.52 is spent on community development programs, $2.01 on education programs, and $0.47 on administration and fundraising. These figures provide not just an income to the women, but also the resources to help them maintain long-term self-sufficiency.

Grasse and Jager are currently selling the beads from Grasse’s dorm room, Yoder 301, and they welcome visitors. They also plan to sell them at the poster sale this week, outside after chapels, and during a night of jewelry-making sponsored by the PAX club in the upcoming weeks. The beads work on an honor system, so whatever is not sold will be sent back to the organization after homecoming weekend.

“This opportunity has merged Goshen’s hope of global citizenship with a simple concept of fair trade jewelry,” Grasse said.